This variant is derived from my "different-moving usual equipment" variants Goldchess and Silverchess, but is itself not a usual-equipment game. For one thing it requires a 9x9 board and 18 pieces aside, and for another every one of the 9 back-rank pieces moves diffently. the variant takes its name from an alloy of gold and silver, much referred to in Dungeons and Dragons as played in the 1980s. The idea of each player having Gold pieces on their left and Silver ones on their right was influenced by Wildebeest Chess, in which each player has a Queen and Bishops on the left and Gnu (Wildebeest) and Camels on the right.

Thanks to this range of images I have finally managed to select distinctive images for all this page's pieces. 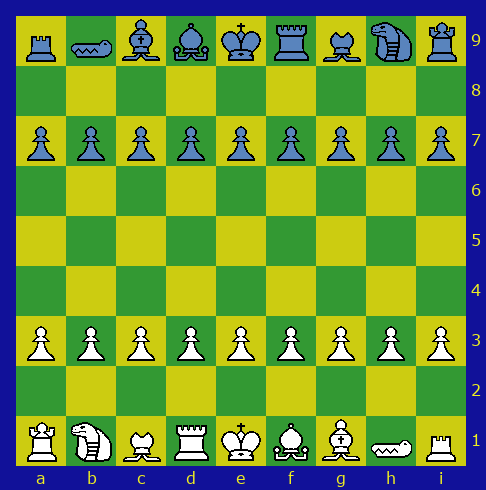 Double-step move, En Passant, Check, Checkmate, and Stalemate are as in FIDE Chess.

Castling is allowed only between the King and Goldrook, and follows the same rule as FIDE Queenside Castling.

I rejected a Pedes inclusive version with a mixture of Goldpawns and Silverpawns, and promotion optional, as equal numbers of both would require a third kind of front-rank piece in front of the King.