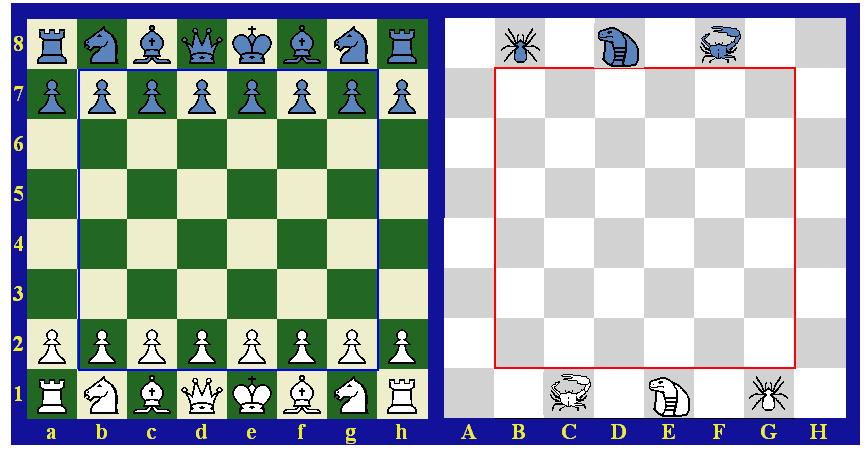 Note the central zones for each board, also note the following terms:

Dimension X board, a parallel universe board inhabited by trans-dimensional pieces.

While in Dimension X, trans-dimensional pieces never attack each other.

A) On the Real World Board (FIDE Board): Pieces are as in Chess

Q: If neither player can make a "normal Fide piece move" is the game declared a draw?

A: No. In the scenario you speak of the player whose turn it is to move would lose, unless he could capture his opponent's King on that turn.

Primary Source of inspiration: Alice Chess and a game of Blue Chip Chess with Jeremy Good.

A special thanks to Jeremy Gabriel Good for creating the Dimension X pre-set.

A special thanks to David Howe for his Alfaerie Variant Chess Graphics (based on Eric Bentzen's Chess Alpha font).

A special thanks to Fergus Duniho for discussing some difficulties with the layout of the original rules with me, prompting me to better arrange them on June 20, 2006 (which I did).

A special thanks to Thomas J. McElmurry for taking time to write relatively detailed commentary regarding the 5 Problems.

And a special thanks to www.ChessVariants.org for hosting and archiving chess variants.

If you will be playing in-person with friends, or you want to keep a board set up for an e-mail game, then I recommend the following (but feel free to change the steps you don't like):

1) Use just 1 board and standard piece set.

2) Use 3 checkers per side (or paper, cardboard circles) to make a Crab, Spider, and Cobra

3) put them on your board and put the normal pieces on top of them as applicable to the starting setup.

4) Make all your moves on the single board. The graphic-checkers indicate that the piece is in Dimension X... You will always know instantly where it can surface.

5) Off to the sides of the board have 3D figurines for Crab, Spider, Cobra. Realistic figures are nice, but-- if you have locking checkers you can simply put your graphic-checker on top of 3-checkers to indicate when it is "on" the real board (i.e.) that it has left Dimension X.

The main idea here is that it will be easier to play the game using one board than it will be using 2 as in the computer version.

6) For the very serious player, mark off the central Zone with marker, thin strips of duct tape, gluing lines of yarn, or some other means. Of course, I'd only do this to one of those cheap cardboard boards. I often see plastic piece sets with boards for under $5 U.S.

Of course the solution becomes obvious once you see it . . .

White must: pinch the black King, moving it to e8; transfer the Spider to the Dimension X board, clearing a path for the Bishop; and move the Bishop to e8, capturing the King.

The Spider and Crab can act in either order, but since the resulting position is the same, I think it makes sense to consider these two permutations as being the same move by White. With this definition, the solution is unique (since the white Cobra is trapped in a web) â€“ a nice touch. All in all, an excellent problem.

Well, this is getting fun.

The second Dimension X problem has multiple solutions; in fact I count

24 [although 23 of them are essentially the same]. In any case White must first get rid of the black Spider on g6. There is only one way to do this:

* The white Spider transfers to F5 on the Dimension X board.

Then White has two options.

* The white Crab pinches the black King, moving it to a8.

* The white Rook captures the black King on a8.

* The white Crab does something, or not.

* The white Knight captures the black King on h7.

Note that in the second case, the white Crab's action is not necessary for the capture of the black King.

I think problem 3 is the best one yet. Black is in quite a pickle, but he can get out of it and win, as long as he can remember not to panic and to deal with the threats one at a time.

In fact the Spider's web has ensnared all three of White's normal pieces. The only white piece free to move is the Cobra, which must free its comrades or capture the black King if White is to survive. It is within striking range of both the black King and the black Spider, but it is blocked by its black counterpart in the one case and by its own Pawn in the other. The black King survives, and White is unable to move a normal piece. Black is victorious for the first time in these problems.

Of course White can play Spider C2-c2, immobilizing both attackers. As long as he doesn't also play Kxb3 (which would put his King right back into danger), this is sufficient to avoid the immediate capture of his King. But White has been around the game long enough (this is his fourth problem, after all) to know that no Dimension X position is truly safe, so he needs to launch a counterattack.

White plays Spider C2-c2; Cobra F4-f4; f8=N, delivering a Dimension X [Game] checkmate. The black King is attacked by the newly Knighted Pawn, which cannot be captured by any black piece (nor can it be pinched or immobilized, as Black has lost his Crab and Spider). The King has no escape squares:

both white Knights. Black's only hope, then, is to capture the white King immediately. (There are too many white pieces on the board for that trick from problem 3 to work again.) The black Knight on e1 can capture the troublesome Spider, but even then the white King is safe: the Cobra's attack is blocked by the Knight on c2, and the black Queen cannot move because Black has already moved a normal piece.

Black cannot win immediately, and he cannot protect his King. White is sure to win on the next move.

Great problem! For the first time, the solution takes two moves. And under promotion is always fun. Also, the possibility of Rxe1 (to preserve the white Spider) had me barking up the wrong tree for a while.

"Black to play and win in 2", you ask "Can Black win in this position?"

This means that the whole time I'm struggling to find the solution, this little voice in the back of my mind is saying "Maybe there isn't one." But you wouldn't do that to us, would you? This time I was starting to think you had.

In fact you hadn't, but then you knew that.

Black can't capture the white King on the first move, so he must deal with the threats to his own King. The white Knight on g6 can only be captured by the black Cobra, but the white Cobra can be captured either by the black Knight or by the black Bishop on h6. For quite a while I wanted to capture with the Bishop, in order to use the Knight on the next move to capture the white Spider and free the black Queen and Rook. But then those pieces wouldn't be able to go after the white King until Black's third move. By that time, White would have played Qf7, and the black King would fall first. So Black needs a faster plan.

Black's first move is: 1... Cobra strikes Knight; Knight takes Cobra; Crab G3-g3, threatening to annihilate the white King via the Pinch/Web Combo (which I had almost forgotten about).

Now White cannot capture the Black King immediately, and the only

Defense against the Pinch/Web threat is to capture the black Spider with the d5-Bishop. (The optional addition of Spider c7-C7 is useless for White.)

If White plays any other move, then Black wins by Pinch/Web Combo.

If White plays 2. Bishop takes Spider [with or without Spider c7-C7],

The Black King is probably feeling rather nervous about now. He has no

defenders nearby, and with the White Knight stationed on c6 it will

take him three moves to get out from behind his immobilized Pawns. He'll be dead by then unless Black can find some counterplay.

blocked, Black looks to his Crab, Cobra, and Knight. He plays Crab

squares on the first rank); Knight c2-e1 (protecting the Crab).

The White King will fall on the next move, either to the Cobra after

being pinched to a1 or c1, or to the Knight after capturing the Crab.

Perhaps he will choose the latter, deeming it more honorable to be

slain by a valiant foe on the field of battle than to be spat upon by a vile serpent.

[Black} can deal with the white Pawn easily enough, capturing it in three

moves if it runs or four if it doesn't. This will leave Black with a

While pondering this problem, I considered some simpler cases, and

learned that King + Spider wins easily against a bare King. But it seems that the Spider can also be a strong defensive piece.

In the present case, White can simply station his Spider on g2 and move his King around on g1, h1, and h2. With no long-range black pieces remaining, the white Spider is immune from capture, cannot be forced to move, and prevents the Black King and Crab from infiltrating the corner. Meanwhile the Black Spider can keep the white King away from h2 by moving to G3, or from g1 by moving to F2. But at any given moment, either g1 or h2 is safe for the White King, and h1 is always safe, because the black Spider cannot reach the edge squares on the FIDE board and g2 is occupied by the White Spider. The White King always has a safe move, and the game is drawn.

*Note this problem tricked the composer who thought Black had a forced win. But Black only wins if White plays poorly. The drawing technique of King + Spider + Crab versus King + Spider is good to know.

I dedicate this game to the memory of H. P. Lovecraft, who wrote many stories of other dimensions and to the memory of Lewis Balog, a friend and member of the Theosophical Society. Lewis loved to discuss theories of time distortions and other dimensions. He passed away several years ago of a serious illness. When I last saw Lewis in good health he looked a lot like "Skipper" from the TV show Gilligan's Island. Lewis was about as good-spirited as the Skipper character. - gkg