Devingt Chess is a variant invented (2005) and commercialised by Leopold de Labrousse. Actual boards and sets are manufactured by the inventor. It is played over a 10x10 squares board, which is easily available in some countries to play International draughts.

The name of the game in French is "Le jeu du Devingt" and is a pun referring to "vingt" (twenty) which is the number of men on each side, and phonetically "devin" which means a fortune teller.

The board has 10x10 squares and is placed with a white square at each player's right corner.

Each side has 10 pawns and 10 pieces: 1 King, 1 Queen, 2 Sages, 2 Bishops, 2 Knights and 2 Rooks. The Sage can be seen as a wise camel drivers and is represented by a camel on the diagrams.

The Queen is placed on the central square of the first row of her color. 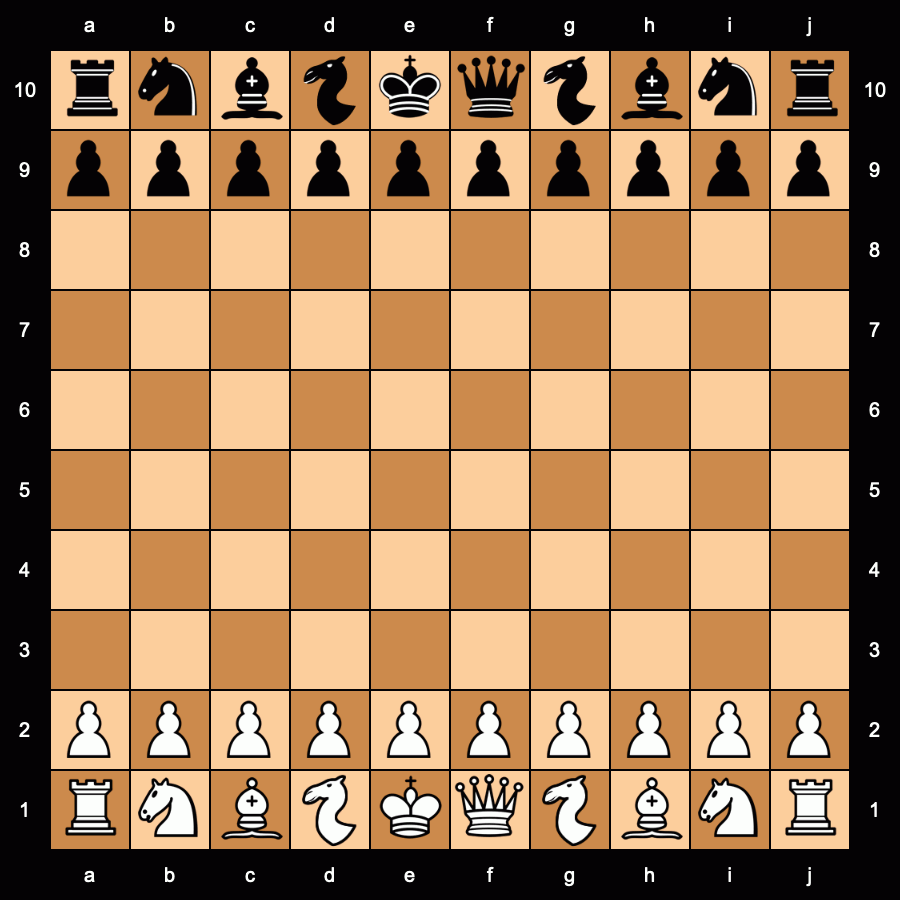 Queens, Bishops and Knights are exactly as at standard chess. Kings and Rooks also except for the castling which is different at Devingt Chess.

Pawns moves and captures as in chess except for their initial moves and they have a different promotion rule which is detailed below.

The new piece is a Sage. The Sage is a (3,1) jumper, it jumps to the opposite square of a 2x4 rectangle, like an extended Knight. No matter what intermediate squares contain. Note that it always stays on the same color of square. This is a well known piece from medieval Muslim great Chess like Tamerlane's Chess which is better known as the Camel.

The goal is to checkmate the opposing King.

Initial Pawn move: Pawns which have not moved yet, may move one, two, or three squares providing that crossed and arrival squares are free. From their second move, they have not this choice anymore and they move only one space.

Pawn Promotion: A Pawn reaching the last rank (10th) of the board is immediately replaced by a piece: Queen, Bishop, Sage, Knight or Rook. A Pawn can promote only to a friendly piece that has been captured, and for which it is exchanged. If no friendly piece has been captured, then a Pawn may not move beyond the 9th rank. An imobile Pawn on the 9th rank can still give check.

Castling: The King moves 2 or 3 spaces toward the Rook and, in the same move, the Rook moves around the King to stand next to him on the opposite side. Therefore, there are four different castlings possible. The condition to allow a castling are standard:

Devingt Chess belongs to the rich category of chessvariants which add a pair of (3,1) leapers to the standard chess set. Pritchard's encyclopedia (The Classified Encyclopedia of Chess Variants, John Beasley publishing, 2007) describes "Dreadnought Chess" (Max Rieck, 1929) where this piece is a Dreadnought, position not given, on a 10x10 board; "Mexican Chess" (Prince Joli Kansil, 1965) where the (3,1) leaper is a Conquistador placed between Knight and Bishop, also on a 10x10 board. Also "Braithwaite's Game" (1976) where the extra piece is ambiguously called a Dame (name of the Queen in French) and placed between Knight and Bishop over a 10x8 board.

The closest invention is certainly the one proposed by Stanislaw Hofmokl-Ostrowski, a Polish lawyer in 1955, who called his game "Mephisto". The board was also the decimal 10x10 squares board and the (3,1) leaper was a Devil placed close the royal couple, as for Devingt Chess. The detailed rules like the initial Pawns' move, Pawns' promotion, castling, are not known.

Also similar is Cardinal Super Chess I, a commercial variant invented by Maureen Jones in 1986, which used a decimal board, with "Cardinals" moving as Camels in one version (in the other version, those pieces cannot jump), placed beside the royal couple (like in Devingt Chess) and whose shape was coincidently rather similar to the Sage's shape. The author of these lines does not know what were the rules for Pawns' initial move, Pawn's promotion and castling.

Also worth to mention is Modern Kamil Chess (Nuno Cruz, 2002) on 10x10 square board also, but where the pieces are on the 2nd row and the Pawns on the 3rd for the main variant. The sideward position of the Camels allows to protect all Pawns on the starting array.

It has been remarked that the Pawns on c1 and h1 are not protected on the initial array of Devingt Chess. This is considered as a minor issue in actual play by the inventor.

The inventor of Devingt Chess can be contacted at the following address: 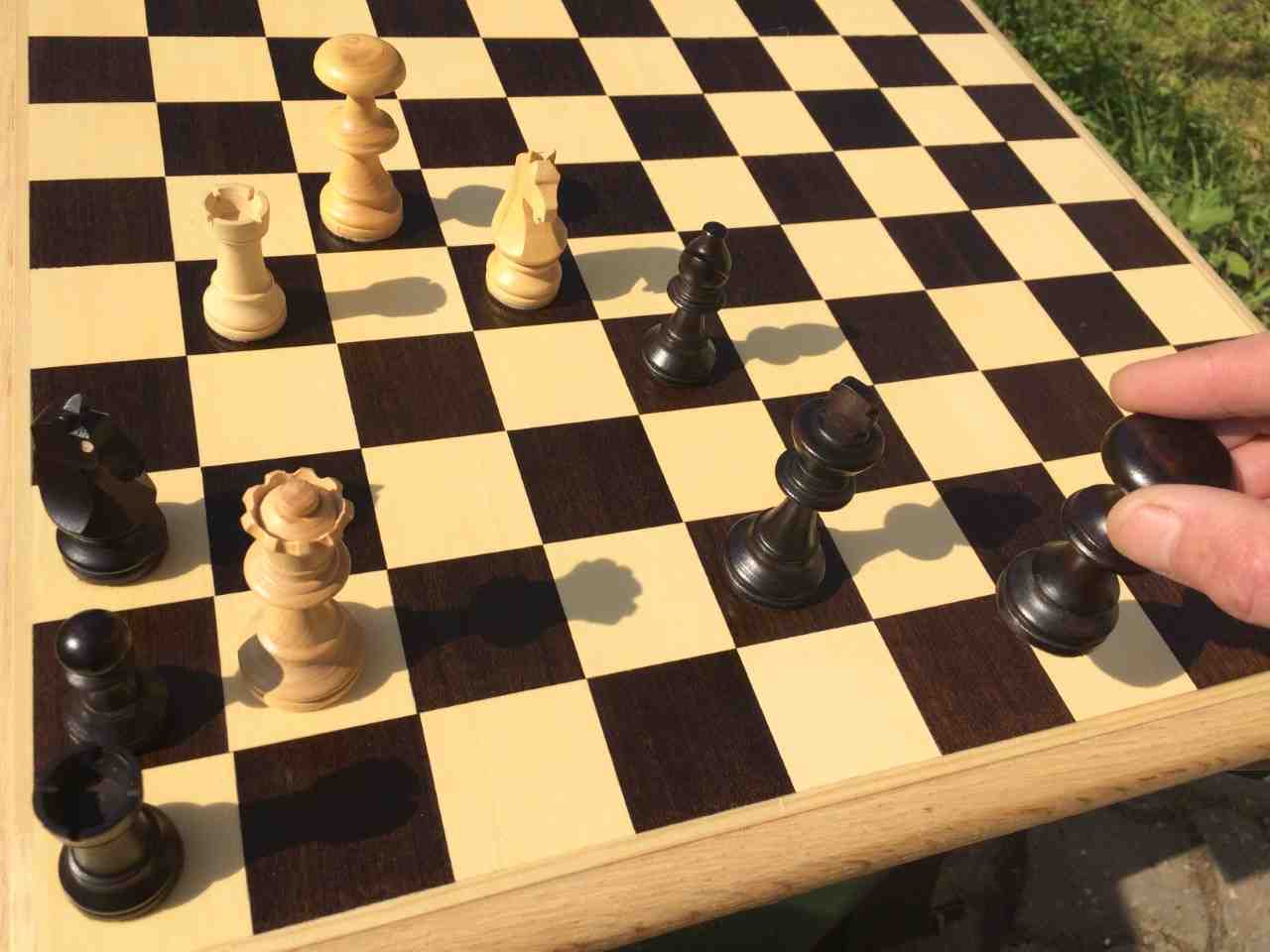