There have been a few versions of Chess on a triangular grid, but they all seem to make various unusual choices in their designs, rather than being simple direct translations of chess to a different grid shape. The closest to a direct translation that I've seen is Chessagon, but it still makes a few unnatural choices.

First, the decision to have players sitting at opposite corners of the hexagonal board, rather than opposite edges, leads to very unnatural-looking pawn movement. But I suppose the reason for this choice was so the initial setup could be fully symmetric and still have the Bishops on opposite colors.

Third, making the Queen the composite of the Bishop, "Rook" and Duke results in an overpowered Queen.

Delta-Nabla Chess resolves these issues, resulting in what I believe is the most natural possible translation of Chess to a triangular grid.

The name "Delta-Nabla Chess" comes from the capital Greek letter delta (Δ) and the mathematical symbol nabla (∇), referring to the shapes of the triangular tiles making up the game board. 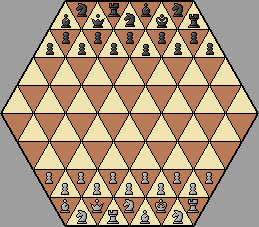 The board consists of 96 triangles forming a hexagon with a side length of 4 triangles.

The choice to have players at opposite edges results in each player having 11 pawns on the second rank and 9 pieces on the first rank. The odd number of first-rank triangles means it's impossible to have a fully symmetric setup and still have the bishops on opposite colors. The setup chosen here seems to be the one that resembles the traditional chess setup as closely as possible while still keeping the bishops on opposite colors and keeping the pawns well defended. With 9 triangles to fill rather than 8 squares, an extra knight is placed in the middle triangle. With bishops being color-bound and rooks and queens being stronger pieces, the knight is the natural choice for an extra piece. It seems appropriate for balancing the total material strength of each piece type as well, as the knight doesn't benefit as much from the additional directions of movement as the bishops, rooks, and queen do. I estimate a knight on this board to be worth about 4 pawns, bishops at 6, rooks at 7, and the queen at 14. By this estimate, having three knights keeps it well balanced against the two bishops. 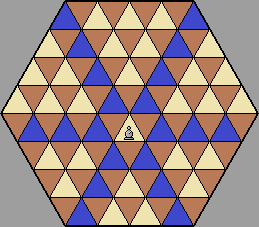 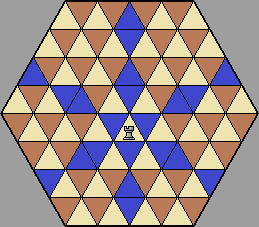 The rook moves through edges of the triangles, or directly through corners to the opposite triangle around the corner, continuing in the same direction as far as desired unless obstructed. The rook moves perpindicularly to the gridlines of the board. 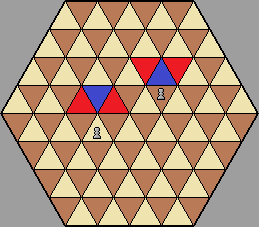 The pawn moves without capturing, one step straight forward like a rook (shown in blue). The pawn captures one step obliquely forward like a bishop (shown in red). The pawn may move two steps forward like a rook on its first move if not obstructed, but if it does it may be captured en passant on the next turn by an enemy pawn capturing on the passed-through triangle as though the pawn had stopped there. Upon reaching the opponent's back rank (that is, any triangle one of their non-pawn pieces starts on), a pawn promotes to any piece except a king. 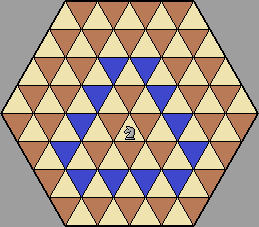 The knight leaps directly to any triangle reachable by a rook step followed by a bishop step continuing outward from the starting triangle. 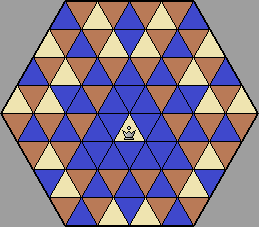 The queen moves as either a rook or a bishop. 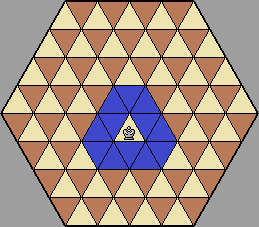 The king moves a single step as either a rook or a bishop, reaching any of the 12 triangles adjacent to the starting triangle.

Same as FIDE, except with the board and pieces as described, and there is no castling. The rooks are not nearly so difficult to develop as in FIDE, as their across-the-corner moves allow them to slip through pawn chains. Castling is thus largely unnecessary, and the asymmetric setup would make any definition of the castling move awkward anyway. So the most natural choice is simply to omit it.

The same board naturally supports a three-player setup. Just have to include a rule forbidding pawns that start in tension from capturing each other in their starting positions(not uncommon in multiplayer variants with compact setups), and add whatever your preferred modifiers are for adapting chess to three players (is a player eliminated by being checkmated, or having their king captured, or does the game end as soon as at least one player is checkmated, etc.) 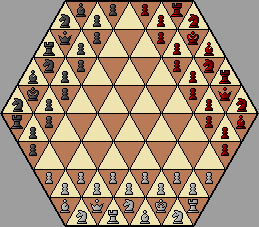