This page is written by the game's inventor, Abdul-Rahman Sibahi.

Dada is, somehow, inspired by variants like Renaissance, Baroque, Rococo, and Gothic Chess; since all these variants were named after the different art schools. I wanted to create an illogical and chaotic chess variant, and started with a strange Baroque-like piece called the Ghost Bishop (see notes.) However, the variant evolved into something very different from the original idea, and here it is.

The board is 7 files in 10 ranks. Ranks are numbered in the usual way and files are lettered from right to left. The King starts on a different colored square from himself. 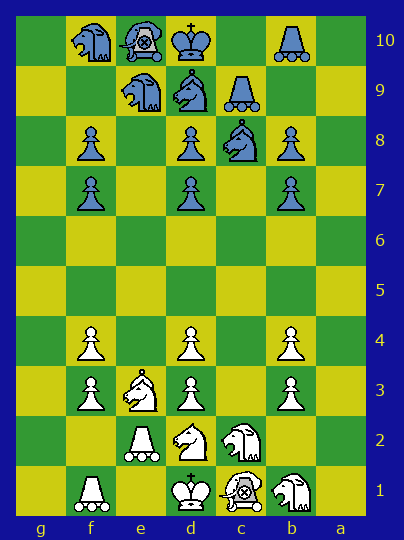 All the pieces are colorbound.

There is no double-move, no castling, or any of these special moves.

The Goal is to capture the opponent's king.

The game is drawn if twenty five full moves (1. Fc3 , Fe8 dPe7 is one full move,) are made without a pawn advance or capture, by threefold repetition, or mutual agreement.

Notation is handled as described in Murray's History of Chess. In short, it is standard algebraic notation except that, in case of ambiguity, the file where the piece started is PREFIXED to the move, as in the mentioned example. Ambiguity is only possible with pawns.

It might be possible to play the game with slightly modified CrazyHouse rules, which might turn out more lively than the original game. Rules :

I am not sure how this would play out, but it's sure an interesting variant, giving all pieces attacking and defending values.

This game is highly experimental, and not at all play-tested. If anyone wants to play-test with Zillions of Games or some other program please feel free to. If you have any suggestions or modifications, please post them.

The Game, technically speaking, is played on two boards: The Dark board and the Light board, imposed on each other. Playing it might feel like a race as to who captures the opponent's King first. The Lion, however, is a very powerful piece because it controls 3/4 of the board (more than any other piece,) and moves on the other 1/4. So, it's a very useful piece to attack with. It's important to avoid the enemy Alibaba who moves on the same 1/4.

It would be interesting to play the Game with Extinction Chess rules.

The name, Dada, is mainly chosen because I like the sound of it. A more appropriate name would be 'Dabbabah Chess' since all pieces are Dabbabahs more or less. However, this name sounds too solid and formidable for my taste. 'Dada' gives more of a childish feel to the game.

Because all (most, if you include the Ghost Bishop,) pieces are Short-Range, this variant qualifies to be among the Short-Range Project games.

The Ghost Bishop moves in a very peculiar manner. In short, it moves like a standard bishop, BUT it is not blocked by the pieces in the bishop's path. Instead, it is blocked by the path two orthogonal moves forward away.

Unknowingly, this variant, and its Crazy version, turned out to have elements from two famous variants : Bughouse, and Parton's Unirexal Chess.

To illustrate the idea better, consider this diagram :

The game is, basically, two simultaneous games of Unirexal chess (or rather half of it) with players competing to Checkmate the opponent king before he checkmates them.

Player 1 makes a white move, then Player 2 makes a move on each board, and so on : You Have Dada, or a very similar game, since here are no Lions.

If we add the little rule from Bughouse that pieces captured on one board may be dropped in the other, You Have CrazyDada. Again, not quite, because of the Lion.

This version, which uses standard board and pieces, is called Semi-Dada. Because it's not exactly Dada, but quite similar. And, if Dada itself proves to be a bad game, Semi-Dada (with or without drops) is definitely better.