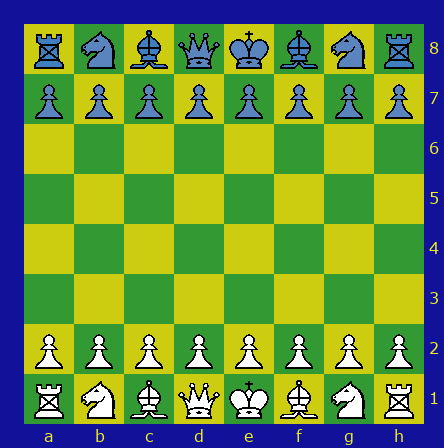 As in FIDE Chess

Play Online: This game can be played on this site using Game Courier using this preset.

(1) Collin's Latin Dictionary translates "Chess" into the Latin "Latrunculi." Elsewhere we can read that Latrunculi means "robber-soldiers" or "mercenaries." Latrunculi was actually the Roman Empire's most popular intellectual game. Many boards have been found which vary in size. The 8 x 8 board was the most common. (2) The following information is from George Duke: "As far back as Duke of Rutland's Chess year 1747 exists use of Crowned Rook(Rook+Ferz), and Logical Follow-up to Duke of Rutland's Chess recently has the Crowned Bishop(Bishop+Wazir)." (3)David Paulowich states that Ruggero Micheletto's 10 x 10 Ultra Chess is somewhat related to this game. He adds that that game give Rooks, Knights, and Bishops the ability to move to all adjacent squares. With two Queens and one Consort (Commoner) in each army.