This variant is a refinement of my before proposal Cetina Random Chess and follows the directrix of increasing at most the complexity of chess within the space of an 8x8 board.

Now the notion that bishops must be a pair is trascended and one is replaced by an Archbishop and the other by a Dragon Horse.

Cetran is an abbreviation of CETina RANdom, introduced in order to simplify a bit the names; so, the before proposal will be renamed as Cetran Chess 1. 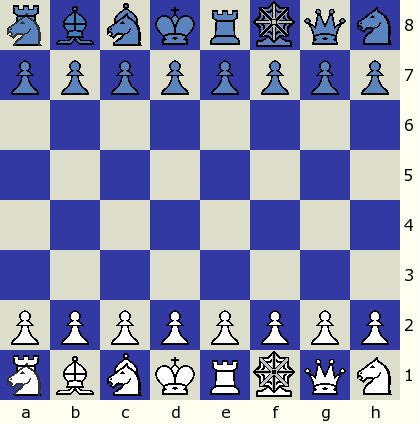 The starting setup is determined at random on an 8x8 board.

Major pieces on ranks 1st and 8th; pawns on ranks 2nd and 7th.

You can choose to play without symmetry from one another side, or play with mirror or central symmetry.

See the presets below.


King, Queen, Rook, Knight and Pawn moves as is usual in FIDE Chess.

Chancellor moves each time as Rook or Knight.

Archbishop moves each time as Bishop or Knight.

Dragon Horse moves each time as Bishop or Wazir (Wazir = one orthogonal step horizontally or vertically).

Sissa moves each time as Rook AND Bishop following a movement pattern of the form nR+nB or nB+nR, where n is any whole number.

There is no restriction on the movement direction of the second stage respecting to the first.

Sissa doesn't leap. All squares it passes by must be empty.

The following diagram illustrates its way of movement: 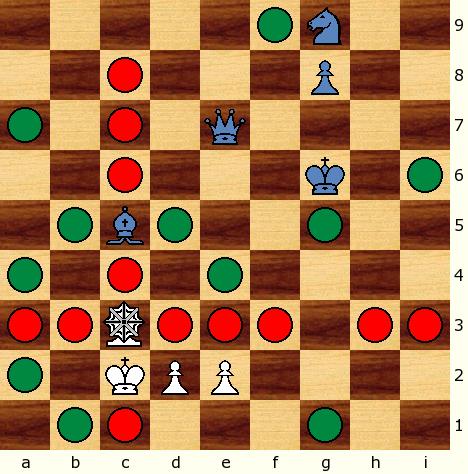 a2, a4, b5,Â d5 and e4 can be reached by moving either like Mao or like Moa; b1 only like Moa; d1 is inaccessible due to the obstruction of White's King and d2-Pawn.Â  Â

The same of FIDE Chess: pawns promotion, en passant, one or two steps at its first move.

The same object of the game, etc.

EXCEPT that castling is suppresed.

Bobby was certainly very bold when proposed his random variant. His action could be seen metaphorically as the result of a strong gale, a devastating windstorm that suddenly broke the peace, the harmony and beauty of the traditional starting setup of chess.

When I knew it, my first impulsive reaction was of disgust, of disagreement, mainly because it was partially random given the two conditions he stated for both keep castling and bishops fall on squares of different color.

Then my reasoning reaction was to do a positive criticism [antithesis] by proposing CC1 which is absolutely random, 100% aleatory, taking advantage of the circumstances to complicate the game by introducing two new pieces: a Chancellor instead of a Rook, and a Sissa instead of a Knight.

After 10 years of playing CC1, I now make the synthesis of FRC and CC1.

It is noteworthy that CC2's piece set has a harmony, an equilibrium regarding the basic kinds of piece movements [bishop, rook, knight] since there are always 4 different pieces that can be moved according those types: