This page is written by the game's inventor, Gaelyn Autumnsong. This game is a favorite of its inventor. 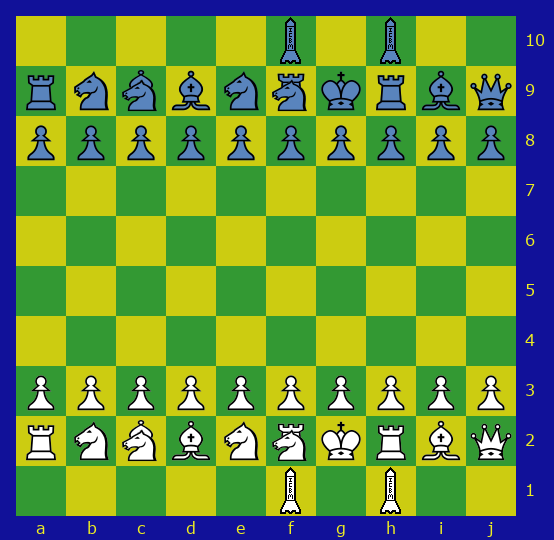 In order to accomplish this, one may use the following method (or any other effective randomization method):

Archbishop - Has the movements/attacks of both a knight and a bishop.

Chancellor - Has the movements/attacks of both a knight and a rook.

Missile - Can move one square per move in any direction (just like the king) and can capture enemy pieces (and be captured by them), but can also instead be launched (an attack which consumes the missile) to any unshielded square on the board, including the square it is on (if it is on an unshielded square) and irradiated squares. In order to launch a missile, the square that a missile is on must not be currently threatened by any of the opponent's pieces, and at least one major piece (anything that's not a pawn) needs to have been previously captured by someone at some point in the game. This launching attack removes ALL pieces (both your own and your opponent's) in a 3x3 area centered on the square where it hits (with the exception of any squares shielded by a king). The attack irradiates the square that the missile was launched to, making that square impassable for the remainder of the game. Lastly, one or both of a player's missiles can optionally be brought along with their king when they castle if two conditions are met (see the "Rules" section).

Castling
Regardless of the starting position, the white king will always end up on i2 when castling in the direction that would normally be kingside (to the right, from white's perspective) and c2 when castling in the direction that would normally be queenside (i.e., toward the a-file―the queen might not actually be on that side of the king). The same principle applies for the black king―castling queenside (O-O-O) will bring the black king to c9, and castling kingside (O-O) will bring the king to i9. In order to castle, the king's destination and every square of the path between him and that destination must have no piece (with the exception of the rook being used to castle) on it, must not be irradiated, and must not be threatened by any of the opponent's pieces; there also must not be any pieces or irradiated squares between the king and the rook, the rook's post-castling destination must not be irradiated or occupied (unless it is the king who occupies it), and the king must not be in check. And of course, just like in standard chess, you may not castle if you have moved either the king or the rook you intend to castle with earlier in the game.

Check Through Irradiated Squares
Check cannot be given through irradiated squares, except by means of the L-shaped jumping attack possessed by knights, chancellors, and archbishops. It is therefore possible to use a missile's launch attack to block check or even to block what would otherwise be checkmate.