This variant combines three variations to FIDE Chess: those of Doug Chatham's Bachelor Chess, Wayne Schmittberger's Wildebeest Chess, and my own Nimrod Chess. I have already created combinations of each pair. Bachelor Kamil, one of my earliest varints, combined the Wildebeest additions with the Bachelor reductions to give a board of the size used here, Queen and Gnu appearing only as promotees, and the special moves. Bachelor Nimrod reduced the board and army size relative to the FIDE-szed Nimrod. Finally Hunterbeest extended the mixing of moves between pieces from radial to oblique pieces, resulting in the other pieces listed below. The Notes section of Hunterbeest also applies to this variant. 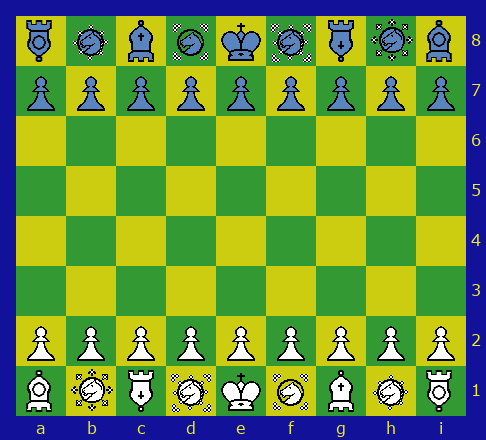 Pawns still have an initial double move and the En Passant rule. They can be promoted to other pieces occurring in the array, but they can also be promoted to a Queen or to a Gnu.

The King may Castle with either five-way piece, exactly as with Rooks Queenside in FIDE Chess.

The word "mate", both as noun and as verb, has other meanings outside Chess, and an extra way to win is to find the King a "mate" in the sense of "partner, companion, esp. spouse". This happens by promoting a Pawn to Queen and reaching a position where a Queen is adjacent to the King.

Here I note that "mate" is also an anagram of "tame", so I also allow a win by taming not a Shrew (for those who know their Shakespeare) but the much Wilder Beast that the Gnu is evidently judged to be. Likewise this is achieved through a position in which King and Gnu are adjacent.

Additionally the King must not himself be in check.