This page is written by the game's inventor, Daniel MacDuff.

I've been working on a sort of expanded-universe project for a while. One of the high points of this project is the existence of alternate Earths where history unfolded differently. In one such Earth, a North-African army seized most of Italy and Southern France in the early 13th century, delaying the western Renaissance by a factor of several decades and upsetting the global culture balance for centuries to come. Â Among the many effects of this is the presence of more obvious Arabic roots in English-Â for instance, instead of Chess, it is Aldress, from the Spanish aljedrez. Â There are, of course, gameplay variations too, the time of divergence being before the Mad Queen caught on.

It could be easily said that the setup is the same as Chess with rotational rather than reflectional symmetry, but I would be remiss if I neglected to include a more intuitive diagram: 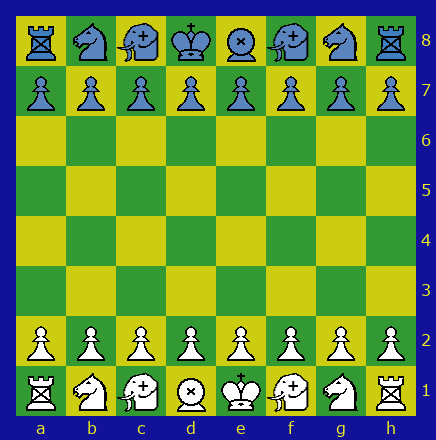 The Castle moves like a Rook in Chess, although along the development of Aldress, it also gained the ability to move like a Ferz.

The Cavalier moves like a regular Knight in Chess.

Unlike in Chess, the name Elephant was never supplanted by Bishop for this piece, with some accounts comparing the North African invasion of Italy to the Punic Wars, though elephants were not used in that conflict. The Elephant in Aldress moves as an Alfil or a Wazir (a two-square leap diagonally, or one square orthogonally).

Despite the lack of success for the Bishop, the Archbishop caught on as the name for chief advisor to the King, and the Mad Queen variant never caught on. The Archbishop moves as a Ferz, one square diagonally. There is one other curiosity of the Archbishop- a check given by one is called a Buke, and a mate given by Archbishop is known as a Quist.

The Pawn in Aldress moves like that in Chess, except instead of the initial double-move, the Aldress Pawn can Berserk. If it captures on its first move of the game, it may make any number of captures after that, in one turn, as long as it could capture those pieces from that position normally.

This gameÂ follows the rules of Chess identically except for the previous points.

So, all in all, I present to you a game that isn't quite chess. Â But almost. Â That was my goal – to create another evolution of Shatranj. Â Be careful not to get Berseked into a promotion – more than one Aldress grandmasterÂ hasÂ erred and found himself down a dozen pawns of material and facing a back-row Castle.