My hex variant Anglojewish Chess came about from a non-confrontational approach of creating Curved hex pieces rather than use existing hex pieces under distance-based names distinguishing them from rectilinear pieces. Since then I posted variants using established hex pieces under my preferred names for them including Hex Horngi, Hexgi, and McGlinwell. Eventually I felt ready to try out Straight linepieces alongside their Curved counterparts. This combination of simple pieces was originally the only one on this page, but I have added others since and so I now term the Rook-Unicorn-Finch-Rabbi combination the MISHLING group, after a Jewish term for someone who is part Jewish and part (usually European White) Gentile.

Technically the page should have been 4-simple-linepiece hex Chess, as I included compound pieces, one of the Straight pair and one of the Curved pair, but complicating the title with the word simple seemed inappropriate! I launched this page with two basic variants, one with the oblique Sennights and one with compounds of the four viewed differently as an orthogonal pair and a nonstandard-diagonal (ND) pair. I have now added a Trios version with just the simple pieces, as 3 each of 4 linepieces plus Sennight, plus 1 Royal piece, fills the area behind the Glinski front rank neatly. A simple-only Trios also suited two new foursomes: the WAITRESS group combining the Rook and Unicorn with the corresponding divergent pieces, and the SHAMMES group combining the Finch and Rabbi with the corresponding divergent pieces. This is because it avoids the question of how an array compound piece is formed.

This page is heavily influenced by my square-board variant 4 Linepiece Fusion, so I consider the option of Fusion subvariants - which bring in further, non-array compounds. The names of compounds of Straight and Curved pieces are explained in my piece article Man and Beast 13: Straight and Crooked Moving. Since originally posting this page I have added one combining Straight and Curved linepieces with Straight Hopping-capture pieces, Sinojewish Chess. 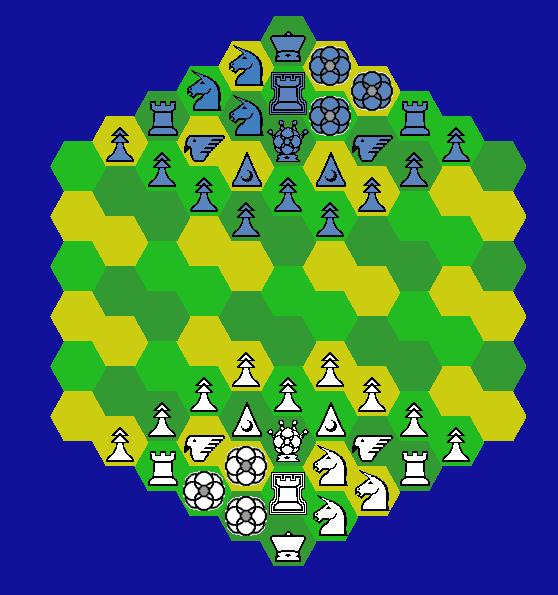 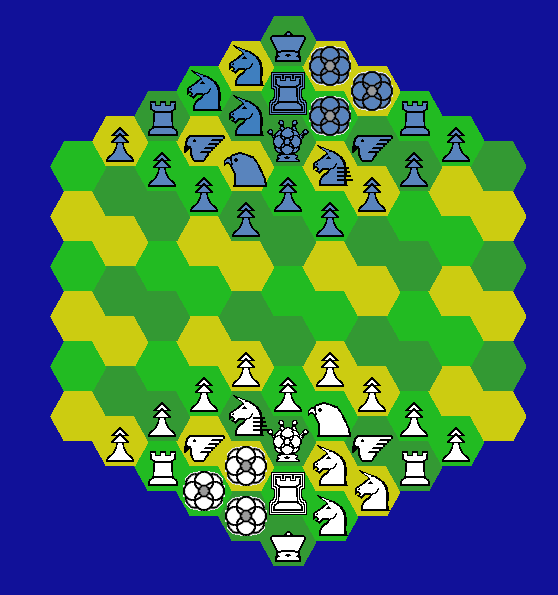 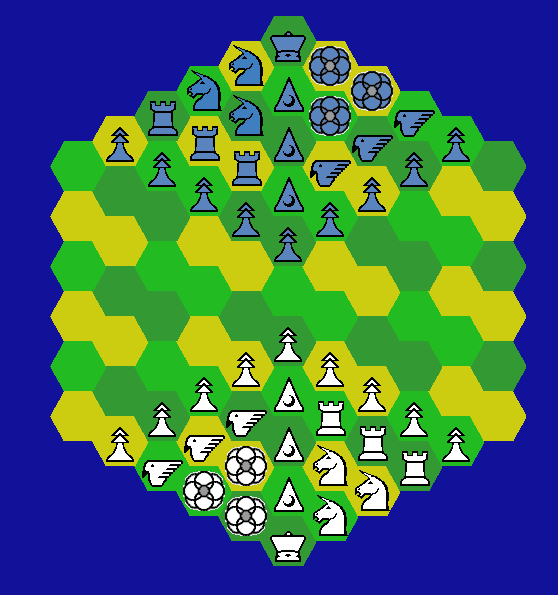 For the following pieces I use the same names as cubic-cell pieces with the same-length moves. This is because while they exist to the exclusion of square-cell pieces (orthogonal ones apart) on pure-hex boards as used here, they can coexist with square-cell pieces on xyrixa and hex-prism 3d boards - the Bishop of my Honeycomb Chess cannot move within a single hex plane. Length-based names are also neutral between Wellisch/AltOrth and Glinski/McCooey analogies.

The following pieces' names are extrapolated from "Roserider", a name that I suggest for the square-cell piece combining the Nightrider and its own Curved version the Rose. Such pieces are documented in my piece article Man and Beast 13: Straight and Crooked Moving. These pieces do not appear in the Sennight variant.

The following pieces' names I fully explain in Anglojewish Chess.

The following pieces' names are extrapolated from "Marshranger", a name that I suggest for the compound of Rook and Rose. These pieces appear only in Fusion subvariants, and there not in the array. Originally I considered using them only for Curved extensions of oblique short components (Cardiranger, Canvaranger, Zebshranger et cetera), but saw that they could be extrapolated to Chateranger and Heretranger (see notes) on a cubic board, and on this board...

A Broker ending a move on the far edge must be promoted to some stronger capturable array piece. In the case of four-compound variants it must become a compound piece, and in the Fusion subvariant of that this can then subdivide. In non-Trios games a player can never have more than 3, and in Trios games 4, pieces of the same type, except Fusion subvariants which allow up to twice those numbers of every component, regardless of whether alone or as part of a compound.

In Fusion subvariants, Fusion involves one simple piece making its usual move to a square occupied by another of the same army. In subsequent moves the combined piece can move as either component. The opposite of Fusion is Fission, in which one component alone makes its usual move to an empty cell and the other component stays where it is. Divergent variants have two subvariants depending on whether a Duchess or Cohen must always divide into the components that originally fused into it or, for example, a Duchess formed from a Rook and Unicorn can become a Waitress and Contrawaitress and vice versa.

Note the spelling of Shammes, with a double M and single S. In particular do not confuse it with Shamaness as is it neither anything to do with Shamanism nor a feminine. Strictly speaking, no double letter is required from a phonetic viewpoint but a double M helps distinguish it from shames pronounced non-phonetically, which is the 3rd person plural of the verb to shame.

As with 4LF, other variants can be played substituting Crooked or Bent pieces for Curved ones as follows. Unless otherwise stated the second piece is bound to a third of the board.
1: For the Finch substitute a LONGGIRLHEXER, for the Rabbi a LONGRANGEHEXER - Crooked pieces making the same turns but always alternating between left and right within a move. In the G/McC interpretation these are Girlscout/Boyscout analogues. Lgh+Lrh=LONGDOUBLEHEXER, Rook+Lgh=LONGGIRLRACER, Unicorn+Lrh=LONGRANGERACER (Doublescout/Girlrook/Boyrook analogues).
2: Ditto but instead of Long- prefix with SHORT-, indicating alternating 120Â° turns, making for slower progress. The Shortgirlhexer would be a Girlscout/Boyscout analogue in the Wellisch interpretation.
3: Ditto but unprefixed, allowing both 60Â° and 120Â° turns, but never both in the same move!
Regarding 1-3 the hex geometry lacks the standard diagonal and thus Curved or Crooked linepieces in that direction. The cubic geometry however has such pieces, the APOSTLE of Paired-everything Tunnelchess and the BOYHEXER with its 60Â° Long and 120Â° Short components. It is from the Bishop+Boyhexer compound, BOYRACER, that hex -racer pieces take their name. Apostle compounds are Rook+Apostle=CHATERANGER, Bishop+Apostle=APOSTRIDER, Unicorn+Apostle=HERETRANGER, and Duchess+Apostle=DOWAGRANGER. These are available only on a cubic board, but a hex-prism one adds Bishop+Finch=PRIMARANGER, Bishop+Rabbi=MODERRANGER, Dicorn+Finch=CHAMBRANGER, Dicorn+Rabbi=MAYORRANGER, and many compounds of three or more components to the plain hex ones. The Moderranger is a promotee in Armies of Faith 3: Assimilation.
4: For the Finch substitute a SIMURGH, making a Viceroy move followed by a Rook move, for the Rabbi a FARRIER, making a Wazir move followed by a Unicorn move. Both turn 30Â° in between. Both are unbound. In the G/McC interpretation these are Gryphon/Anchorite analogues. Simurgh+Farrier=HIPPOGRYPH, Rook+Simurgh=HARPY, Unicorn+Farrier=GUNSMITH, Rook+Farrier=FARRIERESS, Unicorn+Simurgh=COSMOPOLITAN (Gorgon/Reaper/Harvester/Ancress/Metropolitan analogues).
5: For the Finch substitute a JACKAL, making two Viceroy moves connected by an optional Rook move, for the Rabbi a COYOTE, making two Wazir moves connected by an optional Unicorn move, in all cases making two 30Â° turns (cancelling out or adding to 60Â° if together). In the G/McC interpretation these would be Wolf/Fox analogues. Jackal+Coyote=WEREJACKAL, Rook+Jackal=SHEJACKAL, Unicorn+Coyote=COYOTETRAP, Rook+Coyote=SHECOYOTE, Unicorn+Jackal=JACKALTRAP (Werewolf/Shewolf/Foxhound/Vixen/Wolfhound analogues).
Regarding 4 and 5 The names are derived from the cubic pieces of the same definitions, where the Simurgh and Farrier exist alongside the square-board Gryphon and Anchorite and 3d-only Celebrant and Nag while the Jackal coexists with the square-board Wolf and Fox and various 3d-only pieces.
6: Although they are not strictly linepieces, a further option for the Sennight variant is Hopping-capture pieces. For the Finch substitute a CANNON, which being pure orthogonal is its own analogue, and for the Rabbi its Unicornwise counterpart a SLING, the Arrow's G/McC analogue. Cannon+Sling=CANNONADE, the Tank's G/McC analogue. The game as a whole could be a G/McC analogue to my square-board variant Wildeurasian Qi if I could devise a satisfactory River! Note that the Brokers starting En Prise to Cannons are each guarded by the Sennight the other side of the centre file.