This is my first entry in the 45-46 cells contest. A 3d variant is unusual for a contest, but Mark Thompson's Tetrahedral Chess in the 84-square contest is a precedent.

It is based on 45 having three prime factors, so that it has a 5x3x3 board, with 5 as the number of ranks. This immediately suggested a 3d extrapolation of a 5x5 variant, 3x3=9 being nearly twice 5 corresponding to 4x4=16 as twice 8 in my first variant Tunnelchess. The dimensions seemed rather too restrictive for Raumschach's Bishops and Unicorns, but Shogi has short-range Generals which are easily generalised to 3d pieces. This gave me the idea of a Minishogi-based variant, stripped of long-range pieces altogether. Using only steppers also steered clear of the controversy of my naming forward-only first-rank pieces after attributes of corresponding symmetric pieces, not that this matters much with so many of my variants since this one using these names! The "Shogi" suffix especially suits this variant as all its pieces - the short-range subset of those from my larger 3d Shogi variant Tunnelshogi - are some kind of "general"! Removing long-range pieces can be seen as the reverse of what Tunnelshogi and Mitregi do, which is add then in more directions.

In light of comments on this game's apparent second-move advantage, I decided to introduce a subvariant with a setup phase. This phase involves reducing the size of each player's front rank, and is inspired by the much more reduced front rank in Minishogi itself. I might have made it an outright rule change, but as the original variant is a contest entry I felt that I should preserve it to make sense of its ranking in the contest. I have also added a Minishogi on a hex-prism board, in which the setup stage is required. 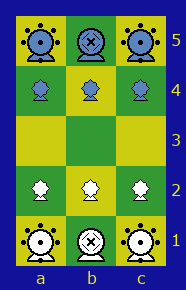 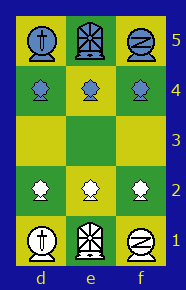 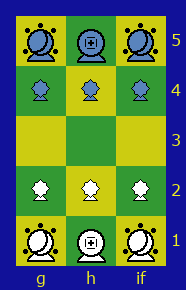 All pieces move exactly one cell in various radial directions. They may be described in terms of the forward and non-forward moves of the Wazir on the orthogonals (1 and 5), the Ferz on the standard diagonals (4 and 8), and the Viceroy on the extra type of diagonal not found on square-cell boards, commonly called triagonal (4 and 4). Instead of promotion from Silvergeneral to Goldgeneral, which does not suit a cubic-cell board, promotion adds all remaining forward moves to all first-rank pieces, a simplified form of Tunnelshogi promotion.

In the original variant play alternates between the two players, starting with White.

The subvariant starts with a setup phase. Starting with Black, each player removes one of their Princelings from a file in which the other player also has a Princeling, until only three files have both players' Princelings on it. The Princelings removed in this phase drop out of the game and cannot be reintroduced. This creates an asymmetry that removes Black's second-move advantage.

The subvariant then follows the original variant's pattern of players alternating moves, starting with White.

There is no initial double-step move, En Passant, or Castling as Shogi has none of these.

Unlike in Tunnelshogi, promotion is compulsory and happens only on the far rank. Captured pieces may be reintroduced in unpromoted form as in Shogi, on any rank except the promotion one.

It is notable that a standard Shogi set may be used with, for example, the physical Rook and Bishop pieces representing the Brassgeneral and Steelgeneral, although a special board is probably required to avoid confusion.

In case you are wondering about the Coastgeneral being seemingly unrelated to the other names I might mention three other 3d generals not used in this game: the SKYGENERAL (Wazir+Ferz+forward Viceroy), FORESTGENERAL (Wazir+forward Ferz+Viceroy), and SEAGENERAL (forward Wazir+Ferz+Viceroy). The Sun and Moon share the Sky, the light of the Sun grows the Forest on one side of the Coast, and the Moon makes tides in the Sea on the other side of it. These and their extensions appear of course in my piece article Man and Beast 04: Generalised Generals.