This game is first in a triad of knight-based games derived from one another and designed to promote the 45 or 46 squares contest:

I show these ascii diagrams more as a tribute to the pieces themselves than because I think they are necessary for my intended audience. To this chess variants aficionado, the knight-ferz and the knight-wazir are extremely beautiful, symmetric pieces.

Knight-ferz: Moves as knight or ferz:

Knight-wazir: Moves as knight or wazir:

Twin Knight's Pawns move as Lia Pawns in Joerg Knappen's Seenschach. To quote Jï¿½rg Knappen: They can move one square forward or sidewards without capturing and they capture one square diagonally forward. They are also Bockspringen or "Jumping Pawns", again to quote Jï¿½rg Knappen: If two pawns of the same colour are forming a double pawn, the second pawn may jump over the first one in forward direction, provided that the target square is empty. A jumping pawn may be captured en passant, resulting in the capture of two pawns in one strike. It is forbidden to jump into the last rank for promotion. Bockspringen is not available for the last pawn of a triple pawn.

Note: There is no initial double-step for these pawns. They start out moving as they usually move, one step at a time.

Object is of course to checkmate the king. Pawns promote on the last rank, to any piece except pawn or king. No castling.

This chess variant is born partly out of the following passages from a book called The Psychology of Chess, by W.R. Hartston and P.C. Wason (Great Britain: Batsford, 1984):

Still, when we are talking about the origins of skill, we must consider the needs of education in chess. For instance, it would be beneficial if there were some kind of test which predicts chess ability. In previous chapters, we have hinted at the 'spatial component' which underlies chess skill. One such promising test of it has reached us. In the late 1950s the Czech physiologist and chess trainer Dr. Pavel Cerny developed a series of chess aptitude tests (personal communication). One fairly simple one consists of a position with a white knight at a1 and black pawns at c3, c6, f3 and f6. 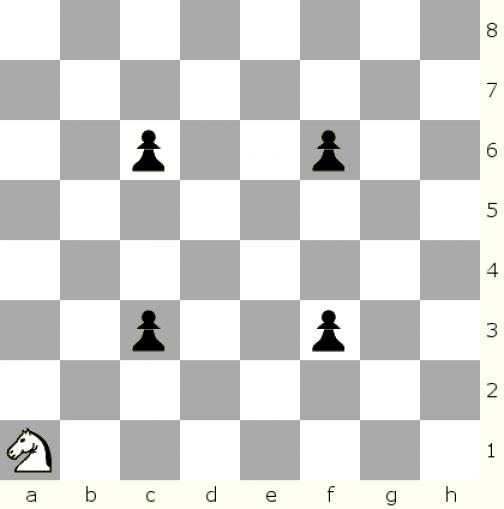 The task is to move the knight from a1 to b1, then from b1 to c1, and so on all the way along the first rank, visiting each square consecutively. When h1 has been reached, the knight must make its way to a2, then proceed in the same way along the second rank. But at no stage may the knight capture a pawn, nor stand on any square on which it could be captured. It follows that the second rank tour is a2 to c2 to f2 to h2 and on the third rank c3 and f3 are omitted. The tour is continued until the board has been covered, ending on h8. The task must be performed as rapidly as possible, and then is immediately performed again. The sign of a promising player is either a good first time score (three minutes is grandmaster class, and five minutes is a county player) or a clear improvement from first to second trial. A saving of about 25 per cent seems to indicate a good learning ability.

This test was performed by a large number of young Czechoslovak players around 1960, and had a good record of success in predicting future grandmasters among them.

[Personal note: I tend not to believe the hype when it comes to aptitude tests but this was an inspiration for this variant nonetheless.]