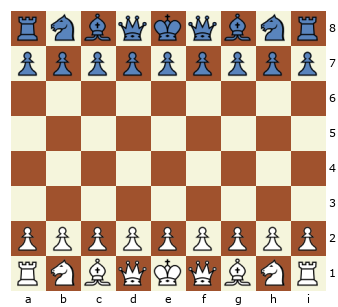 Symmetric Chess is played following each and every rules of Chess but making two slight adjustments appropriate to the 9x8 board.

1) When castling king moves 3 squares towards either rook.

2) Both bishops of each player cannot run along squares of a same color. One of them must change in such a manner that it transits through squares of the other color. Being in its original square without having been moved before, it will take an orthogonal step towards any of the 3 surrounding squares that are of the other color, provided that these are empty. This special move is called conversion and it must be done as an ordinary move during the game.

In the following diagram the g1-bishop may make the conversion by moving towards either f1 or g2 or h1. 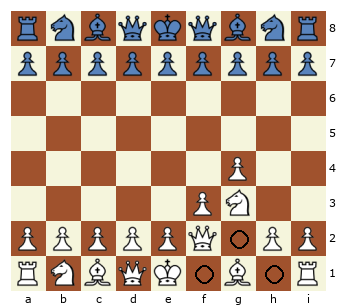