Everything moves exactly as with FIDE chess, except that pawns at e2 and e7 are Royal and the Kings are non-royal.

You can access a zillions implementation of Royal Pawn Chess from this page.

Standard board except the Pawns at e2 and e7 are Royal Pawns. 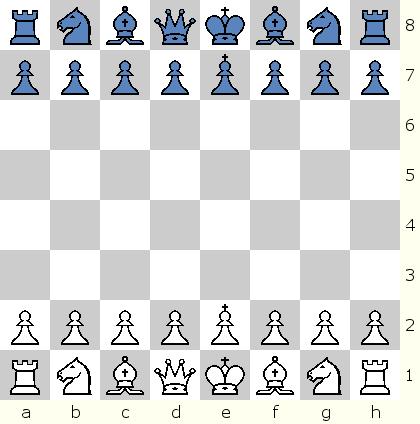 1. The object of this game is to checkmate the opponent's Royal Pawn (located at e7 and e2). An alternate winning condition is to promote the Royal Pawn.

2b. A Royal Pawn can't put itself into a circumstance which would allow it to be captured via en passant. (That would be self-checking.)

3. In the unlikely event a royal pawn reaches the eighth rank, that shall be a game ending move counting as a win.

4. A non-royal King can castle.

5. A Royal Pawn can not castle but must move as any other pawn.

Many hearty thanks go to Tony Quintanilla for being kind enough to help me bring Royal Pawn Chess to the chess variant pages initially.

I feel immensely grateful towards Christine Bagley-Jones for designing the elegant Royal Pawn piece that I am now able to use. Thank you!!

Thanks also to Sam Trenholme for asking the following question, which helps me to clarify the nature of this game:

"Since the King is not royal, can the King put itself in check or castle through check?"

My answer: Yes, unlike in FIDE chess, the king can even sacrifice it/himself. The king in royal pawn chess only looks like a king but is really no more than a guard (or decoy king, if you will). The only checkable piece is that highly vulnerable Royal Pawn, sadly restricted to ordinary pawn movements. So yes, the king can put itself in 'check.' And the king can castle through 'check.' Although the king is allowed to castle, I doubt one will encounter a worthwhile excuse to move the king further away from the center of the board where royal pawns are likely to be confined for most of the game. The king will likely wish to remain there too, in the center, at first to defend, later maybe even to attack. To talk about the king in this way - in terms of 'check' - is, of course, misleading, since the king is not actually subject to check, only the royal pawn is.

A word about strategy:

You will likely want to advance your f and d pawns one step right away to provide buffer for your royal pawn.