This chess variant was invented by King of Sweden (1746-92). The objective is checkmate. On the four extra corner squares are initially positioned two General-Adjutants per side. The General-Adjutant (also called Amazon) moves like a Queen + Knight. This piece is known since medieval times. Otherwise regular rules apply, except for the additional possibility of pawn promotion to General-Adjutant.

Among Swedish kings, Gustav is regarded as the foremost patron of literature, art, and science. He founded the Swedish Academy in 1786, which is the institution responsible for the Nobel prize. Gustav instituted a series of financial and judicial reforms to correct corruption in high office, grant freedom of the press, and complete religious toleration. He enlarged the navy, making it one of the strongest in Europe. In 1790, at Svensksund, south of Finland, he personally led the navy to a crushing victory against the Russian fleet. In this colossal sea battle, among the biggest in the historical record, the Swedish fleet managed to destroy a third of the Russian fleet. This enabled Gustav to end the war on terms favorable to Sweden. In 1792, at a costume ball at the opera house, Gustav was shot and fatally wounded in a plot conceived by hostile nobles. 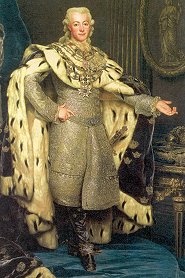 
If a Queen is worth about 9 points, then a General-Adjutant is worth about 12 points. It seems like this game works very well, despite the fact that the combined piece power is enormous compared with regular chess. Source for chess variant is Hand-bibliothek fÃ¶r sÃ¤llskapsnÃ¶jen. Stockholm (1838-39).

The following preset is automated, including the 'en passant' and castling moves. Pieces can be moved by pointing and clicking. When promoting a pawn, you will be asked which piece you prefer.