Compound Chess is chess on a 10x8 board with Sergeant pawns and armies of compound pieces (the corner ones are Rook-Alfils). Below is a link to play on Game Courier. 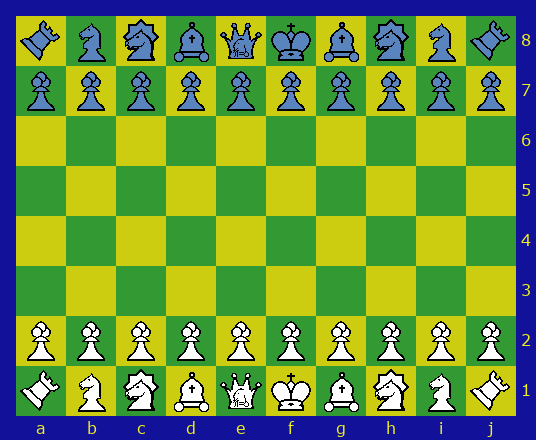 The figurine depicting a Knight-Pawn compound piece (.NP) is also known as a dragon. It has the combined powers of the normal chess knight and the normal chess pawn. In this game the dragon can capture (a sergeant) en passant, but does not promote upon reaching the eighth rank. Given that all the dragons in the setup begin on their side's first rank, none can ever make an initial double step like a chess pawn in this game. The Sergeant (SE) moves and captures one square forward or diagonally forward. Like a pawn, the Sergeant may make a double non-capturing move straight forward on its first move. When double-moving, a Sergeant may, as stated, be captured en-passant by a dragon, but it may not itself capture en-passant. In this game a Sergeant can promote to any piece type in the setup, except for a king.

The figurine depicting a Bishop-Dabbabah compound piece (!A) is also known as a Bede. It can move like a bishop or like a dabbabah (i.e. leap two squares on a rank or a file). The figurine depicting a rotated rook (R4) represents a Rook-Alfil compound piece that can move like a rook or like an alfil (i.e. leap two squares diagonally).

Castling is like as in standard chess, except a king goes three squares sideways during the process (instead of two squares), and it castles with a Rook-Alfil piece that's as yet not been moved. Threefold repetition of position is a draw as in chess, and similarly the 50 move rule is also in effect in Compound Chess (i.e. game drawn if no captures or [Sergeant] pawn moves before 50 consecutive moves by both sides).