The Sergeant is a logical development of the Pawn and Berolina Pawn, since it combines the movements of both. The Sergeant was used as least as early as 1943 in Dr. Arno von Wilpert's game Wolf Chess, but it is possible that was not the first use of this piece.

The Sergeant is known as the Universal Pawn in the game Three Fat Brothers. The Pawns in some small variants, such as Congo and Capture the Flag Chess, move like the Sergeant, but without an initial double-step.

The Sergeant moves and captures one square forward or diagonally forward. Like a Pawn, the Sergeant may make a double non-capturing move straight forward on its first move. When double-moving, a Sergeant may be captured en-passant by a Pawn, but may not itself capture en-passant. Sergeants generally promote as do Pawns, but they may (as they are in Wolf Chess) be more restricted in their promotion possibilities than Pawns, since they are more likely to survive to reach the back rank. 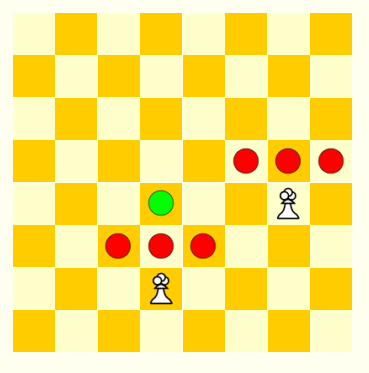 This is an item in the Piececlopedia: an overview of different (fairy) chess pieces. Written by Sergey Sirotkin and edited by Peter Aronson
Updated by Greg Strong WWW page created: 2001-10-01
WWW page updated: 2020-12-14 ﻿