This game is a favorite of its inventor.

The driving idea behind the invention of this chess variant was to create a new game without disposing the large heritage of the classical game. All rules of orthodox chess are kept in Shako, and the way the pieces are set up in the opening array allows the players to practically mimic all the openings used for usual chess. Indeed, this variant presents a very short learning curve for the experienced chess player.

There are two new and additional types of pieces. One is the Cannon, borrowed from xiangqi (Chinese chess), with the intention to bring back together the two branches of the game that went of from the Silk Road, one to Chinese empire in the east, the other one to the Persians and the Arabs in the west. The second new piece, an Elephant, is inspired by shatranj and medieval chess in order to bridge with a prestigious past.

The design of Shako was completed in 1990. Shako has an entry in D.B.Pritchard's The Classified Encyclopedia of Chess Variants (2007). It is also described in A World of Chess from J.L. Cazaux & R. Knowlton (2017). Shako is one of the few variants that can be played on PyChess website, on Jocly and on AI AI platforms.

The word shako means “chess” in Esperanto, which is another kind of non-conformism and utopia.

You can play Shako with Game Courier here!

The board is the decimal board with 10 x 10 squares.

There are 44 pieces of 8 different types, 22 for each player: 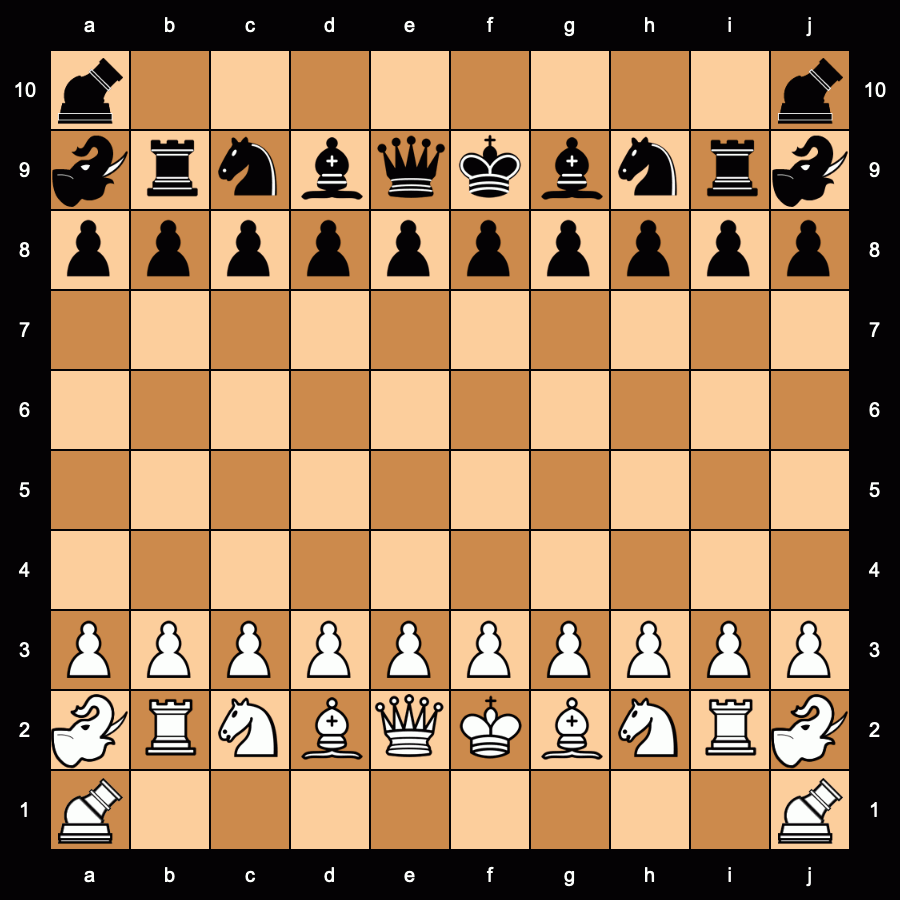 This is the original diagram made by Hans Bodlaender in the 1990s.

Castling remains a simultaneous move of the player's King and one Rook, with the same conditions than at orthodox chess.

Pawn: it can move straight forward one, or two square from its starting position on the board, without capturing. It captures one square diagonally forward.  Identical to standard chess and Shako.

Cannon: exactly as in Xiangqi. The Cannon moves without taking like a Rook, but it takes by going in a straight horizontal and vertical line and jumping over exactly one piece. When a Cannon takes a piece, there must be exactly one piece between the original and final square of the Cannon's move - this piece may be of either color. This is identical to the move of the Cannon in Metamachy.

Elephant: it moves one or two squares diagonally. When an Elephant moves two squares, no matter what intermediate squares contain. Note that it always stays on the same color of square. The Elephant moves as the combined Alfil and Ferz from Shatranj, two pieces which were also present in mediaeval Chess and have disappeared with the birth of modern moves for the Bishop and the Queen. Exactly as in Metamachy.

Shako belongs to a sub-category of Decimal Chess which is very popular. Such a board is easily available from International Draughts. The strongest points are:

Shako was a submission in the contest to design a large chess variant. Here you see a photo of Jean-Louis Cazaux set of Shako. The photo has been made by Jean-Luc Muraro. If you click on the photo, you see it in larger size. 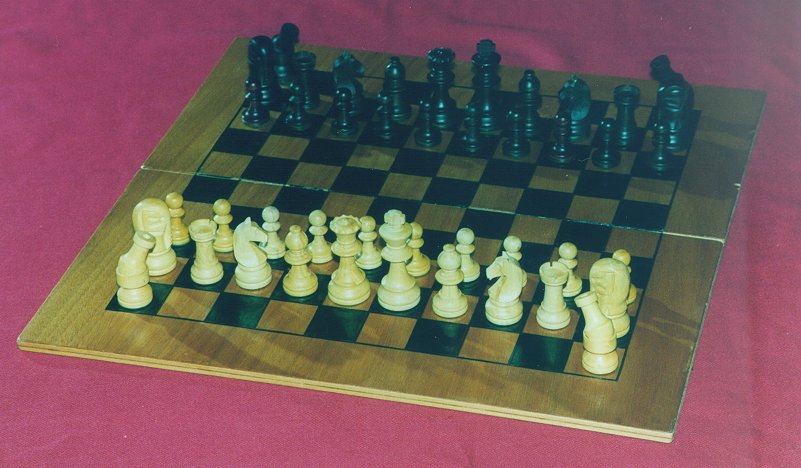 The earliest page on Shako had been written by Hans Bodlaender in the 1990s. This page has been refreshed in 2022 by the author, Jean-Louis Cazaux. In memoriam for my best friend Jean-Luc Muraro (1967-2020).

On step beyond: For a game with more pieces filling the empty squares, try Pemba!