In 2007 I marked the Chinese Year of the Pig with a page of semi-modest variants of assorted standard and already-variant games, following it up in 2008 with a rodent-piece-heavy variant for the Year of the Rat. For the Year of the Ox in 2009 I found in my Man and Beast articles many pieces whose names are to some extent bovine. Some could not make it onto the variant. Charolais is a breed name for more than one genus of animal - and of Chinese horoscope animal at that. Similarly rectilinear-specific pieces outnumber the hex-specific Aurochs, and I wasn't keen on this being a hex-prism variant. My use of the name Ox itself for a piece dates only from 2012, and therefore was not around at the time when I was plannign this variant.

A rich source of pieces named after oxlike animals (plus a King) is compound pieces in the 10-rank variant from my worst surviving page, Great Herd. I also decided to throw in a few Calves, a piece from my nested variant sFhIoDgEi, but with different promotion rules. So what pieces would fill it out? My first thought was FIDE radial ones, but recalling how I took care to give Random Rodent a touch of Xiang Qi I decided instead to use Xiang Qi pieces, again the strongest. This excluded the General and Mao - or even the Moo to which it might otherwise have been appropriate to upgrade it - as Great Herd pieces can do all that those can and more. It also made sense to model the front rank on Xiang Qi rather than fill it with Pawns, a major criticism of Great Herd being how the leaper-heavy back rank made Pawn structure useless.

Rather than the actual Xiang Qi board, whose 10 ranks would expose major pieces to Calves, I closed it up to Shogi's 9. This gives a middle rank of squares equally threatened by both players. It also brings in a modest variation to Xiang Qi that I never thought worth giving its own page: XIANG QI ON A SHOGI BOARD (XQOASB). The Shogi board has no River or Fortress, and files do not limit pieces that actually have file-changing moves. For this reason XQOASB substitutes leaving one's own camp for leaving the Fortress, and entering the enemy camp for crossing the River. This enables Elephants to capture each other. Castling is also allowed as this array has neither the Xiang Qi obstacle of confining Generals to the Fortress nor the Shogi one of corner pieces with no sideways move. A problem with XQOASB is that a Mao cannot move until the Cannon or Elephant get out of their way. A second modest variation that I decided to deploy was that of FURTHER-PROMOTION XIANG QI, in which a promoted Point can optionally be further promoted to a captured stronger piece at the end of a move along the far rank. If anyone wants to write an implementation for either Xiang Qi on a Shogi Board or Further-Promotion Xiang Qi as variants of standard Xiang Qi, feel free to do so but please credit me.

Returning to the main feature, the name derives of course from the initials of Year of the Ox. The O of Ox is both unambiguous (contrast dog/dragon, rabbit/rat, or sheep/snake) and well suited to acronym-forming. No doubt it means something in at least one Far East language - nothing rude, I hope! As this page combines a very strong Xiang Qi influence, lesser Shogi one, and Chinese theme I have ticked the "Oriental" box. Again feel free to write an implementation but please credit me. 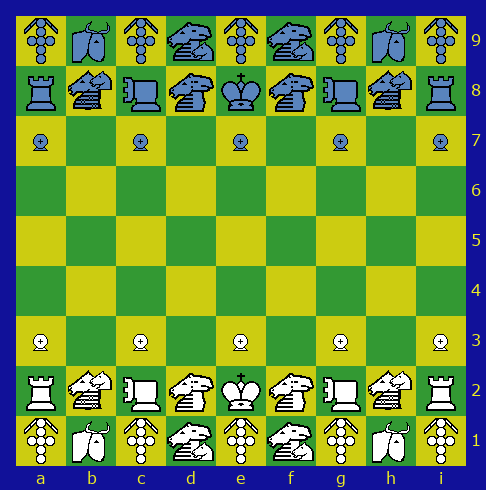 Castling involves the King moving to the Cannon square and the Rook to the Bison one, with usual restrictions.

Kings cannot leave their camp. Opposing Kings cannot share a file or diagonal without an intervening piece. Sharing ranks does not of course arise.

A Point entering the enemy camp is promoted by an extra move one square orthogonally sideways. At the end of a move along the far rank it can be further promoted to a Rook or Cannon subject to a player having no more than two of either.

A Calf entering the enemy camp must be promoted to a Gnu, Gazelle, Bison, or Buffalo subject to a player having no more than three of each.

Check, Checkmate and Stalemate are as usual. A player can also win by getting their fifth Calf to the enemy camp while having three of each compound leaper, but that is unlikely to happen.

Pieces can be represented by two distinguishable FIDE or XQ sets, or even one of each.

The terms Bison and Buffalo mean the same New-World ungulate, but two distinct Old-World ones, and so are not exact synonyms for each other as Wildebeest is for Gnu.

Given how this game draws on one of my earliest it is worth noticing how my approach to themed variants has matured since then. I have learned from successes and errors alike of others as well as my own. In both this and Random Rodent I complement the themed collection of leapers with unthemed long-range pieces. No longer do I try to use only the themed pieces, as I did with Great Herd. Likewise I rooted my Armies of Faith series in the King, Knight, Pawn, and Rook that all endure across Occidental Chess history. Yoto could be considered to Great Herd what Fergus Duniho's Yang Qi - or perhaps even more so his Eurasian Chess - is to FIDE Chess. By that I mean a variant better thought of as combining the strongest pieces from two variants than as a "strengthened version of" either one earlier game. That is not to claim this variant as being as great a game as those two, but it certainly improves far more on Great Herd than any variant does on FIDE Chess or Xiang Qi!