This variant, inspired by Chaturaji, applies the same method of putting 4-player variants on the 2-player board to Shogi. It is anticlockwise rather than the clockwise of Chaturaji so that, as in Shogi, the Rook starts both to the right of the Bishop and unable to leave the camp until another piece moves out of its way. The Bishop remains kept in place by existing pieces.

Other similarities to Chaturaji, where they are not characteristics general to 4 player variants such as alliance forming, can be seen as differences from Yonin, which also uses only five piece types whereas this one uses all eight.

As Chaturaji is Sanskrit for "four kings", I wanted to translate that phrase into Japanese to reflect the inspiration behind this variant. There seemed to be some ambiguity over the word for four. A comment in reply to a request for this information gave "yon", composed of a "yo" character followed by a presumably syllabic "n", which lists of numbers in Japanese found through a search engine confirmed. This reminded me of Yonin Shogi, another 4-player Shogi on a standard Shogi board, but this uses only one character for four, a character which appears (based on the existence alongside it of Sannin Shogi) to be "yo" but not the "yo" in "yon". There has since been further clarification here. 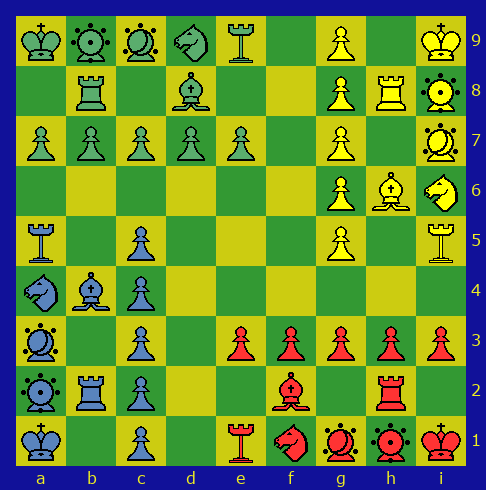 Promotion is as in Shogi, with the promotion zone defined as the opposite-colour player's first three ranks.

A captured piece goes into the capturing player's Reserve and that player can reintroduce it unpromoted as part of their own army in place of a subsequent move. Theoretically a player can end up with four each of Rook and/or Bishop as well as the weaker pieces. In addition to Shogi restrictions a piece may return only on one of the 45 squares on or in front of (from the player's perspective) the camp of the player reintroducing it, and a player with two Bishops on the same binding may not put a third on that binding.

A player is Checkmated when their King is threatened by the player about to move. That player's pieces, both on the board and in Reserve, are removed from the game. This is because the variant has a greater density of pieces - particularly long-range pieces - than either 2-player Shogi or Yonin Shogi. It also gives an incentive to postpone Checkmating the first two players in the hope of capturing more pieces.

Could there be a three-player version - a Sano ("three kings") Shogi to go with Sannin Shogi? Possibly, but it would not use Sannin's hex board as that would not have Kings! I could see one camp and the five squares immediately in front removed, the centre square becoming a triangle, and the rest folded round into a 71-cell board. There would of course be the question of what "forward" would mean from the fifth rank onwards, and how pieces could travel through the central triangle.

More promising is a 10x10 Yo[n]o Mitregi, shoving a Mitre between the Helm and Silver, and two Crosses replacing the middle Point. Each player's return squares would increase to 60, with the Bishop return restriction extending to Mitres. 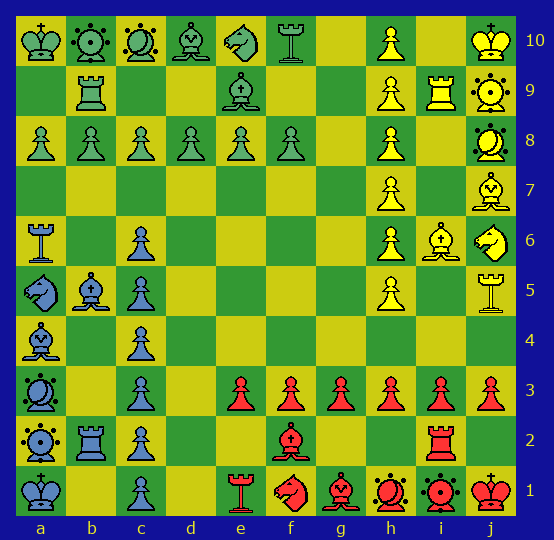