The idea for this variant struck me very suddenly. If early Occidental Chess can be enhanced to Courier, why should not Xiang Qi be similarly enhanced? The only question was what to take from each game, and here's what I came up with.
* From Xiang Qi: 10 ranks, River between middle ranks, capturable pieces, none of them leaping and none numbering less than two aside, gaps in front rank in front of those pieces, square Fortress with same pieces' files marking its edge.
* from Courier: 12 files, addition of Bishops just inside Elephant files, King and capturable Wazir.

This gave a variant with a 120-square board, a larger and more populous Fortress, the preservation of the XQ front-rank's 4 regularly-spaced gaps but increased from every 2 files to every 3, and the XQ initial threats and protections.

I decided against adding the Arrow as that would overlap too much with Yang Qi and the obvious position would leave pieces threatened but unprotected. 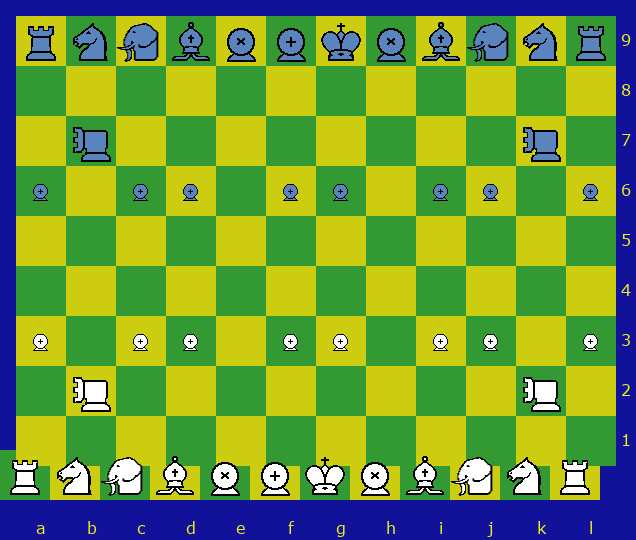 The border between the middle ranks is a River. Points crossing it are promoted by adding the ability to move one step sideways. Elephants cannot cross it and Bishops, as in Anglis Qi, can do so only by a move neither starting nor ending on the middle two ranks.

The middle third of the camp, from one Ferz file to the other, forms a 4x4 Fortress which the King, Wazir, and Ferzes cannot leave. Enemy Kings cannot share a file without an intervening piece. As the Fortress is large enough for both Kings to reach the two diagonals through the centre of the board, a fact to which my attention was drawn in a comment below, they cannot share those without an intervening piece either.

Check, Checkmate, and Stalemate are as in Xiang Qi.