This game was inspired by my desire to somehow make use of both the waffle piece type (as named by Ralph Betza) and the lieutenant piece type (from Spartan Chess). Besides the former, the latter was suggested to me as an interesting minor piece by Dr. H.G. Muller, as an idea for a kind of smaller board size variant I was considering. I had had trouble finding a satisfying use for the waffle piece type, when used along with just the standard chess pieces. It occured to me to try going to a rather large board size, so that I might be able to make use of both piece types that I had in mind, but in just one game. I then looked at the old 12x8 chess variant Courier-Spiel with fresh eyes, and decided that it had the board size that I wanted to use for the present 12x8 chess variant game.

For this game, I decided to replace the two ferfil compound pieces and the guard and centaur piece types that are used in Courier-Spiel, and use instead the waffle and lieutenant piece types (with my chosen setup so that all pawns are initially protected). These two non-colourbound elephant piece types I've chosen (and renamed Working and Lead Elephants respectively) have the advantage that they can both shift sideways (among other things), useful when developing pieces to a possibly crowded third rank. I also made the rules so as to greatly speed up castling (also allowing one's rooks to be connected sooner), which I felt desirable for a game played on such a wide board. 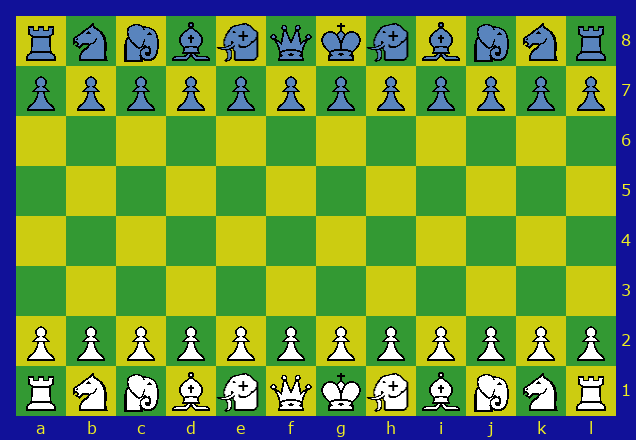 There are 8 piece types in Wide Chess, 6 being the same as for standard chess (pawn, knight, bishop, rook, queen and king). There are two non-colourbound elephant piece types, the first being the Working Elephant:

The Working Elephant is a compound piece that moves like a wazir (one square orthogonally, that is by rank or file) or like an alfil (i.e. leaps 2 squares diagonally); this piece type is more formally known as a waffle (or phoenix). The second elephant piece type is the Lead Elephant:

The Lead Elephant is a compound piece that moves like a ferz (one square diagonally) or like an alfil (i.e. leaps 2 squares diagonally) and it can also make a strictly non-capturing one square sideways move on a rank; this piece type is more formally known as a lieutenant (from Spartan Chess). Here's a diagram of how it moves: 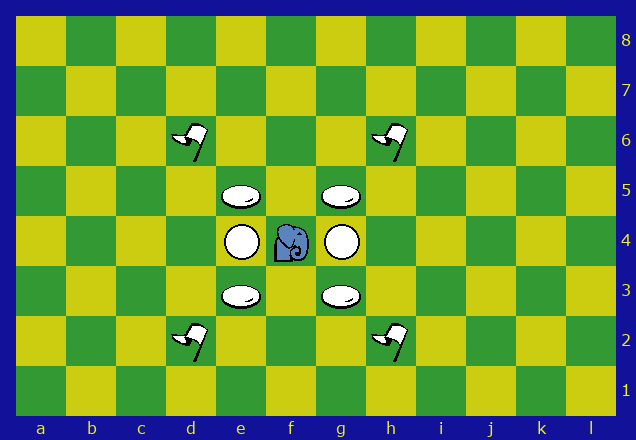 The castling rules for Wide Chess are as follows: A king that has never moved, and is not in check, can 'leap' once a game, along the first rank, to any unattacked empty square between it and an unmoved rook, followed by said rook 'leaping' to the king's initial square so as to complete castling in one single move. It does not matter if any squares in between are occupied or under attack.

Threefold repetition of position is a draw as in standard chess, and the 50 move rule is also in effect in Wide Chess (i.e. game drawn if no captures or pawn moves have been made before 50 consecutive moves by both sides). Pawns move as in chess, and can promote to any piece type included in the setup, except for a king.

A variant idea of mine some may wish to try would be 'Wide WAD Chess'. This would use the same rules and setup as for Wide Chess, except to replace each side's Working Elephants with WADs (better known as Champions, or Cs, from Omega Chess). Champions have the same powers as Working Elephants (more formally known as Waffles, or Phoenix'), plus they can move like Dabbabas (i.e. leap 2 squares orthogonally, that is by rank or file). On a 12x8 board, such as for this variant idea, I'd tentatively estimate a Champion (C) to have a value of 3.86(or 3.75 approx.). Note that this piece plus a K can force mate vs. lone K (on 12x8 board) in 37 moves max. - Dr. H.G. Muller, citing endgame table.

[edit: It turns out that the quirky castling rules for Wide Chess have some slight sort of precident, in at least the following variant, in that in it, an unmoved king is also allowed to pass over squares that are under attack:]

Here's a link to another wide board variant of mine, namely 12x10 Wide Nightrider Chess: