After creating Wildeurasian Qi I promptly attempted a 3d version, Ecumenical Eurasian Ninjachess, but was never entirely happy with the latter. It left the directions of the Unicorn, and of many dualless 3d leapers, unused.

Having three types of simple piece in a group does of course complicate things. WEA Qi and EE Ninjachess both extended the 2+2+1 structure that the Rook/Bishop/Queen group in Fergus Duniho's Eurasian Chess inherits from FIDE Chess. Here I have 8 of each simple piece, 4 of each pairwise compound, and just one each of each compound of all three. This makes for 8*3+4*3+1=37 pieces aside in each group, plus the Emperor making 112 symmetric pieces and so occupying 2 ranks. The Stockbroker piece that I pioneered fills each player's third rank.

I deferred this variant to post Dream Chess 47 in time for the contest to which it was relevant. Weltschach is thus my last new variant of 2008, and fortuitously on a suitably grand scale to finish the year on. This perhaps makes it all the more appropriate that it is in 2016 that I am able to update it with virtual single images of each level in the array.

The name is German (my indicator for a board of an exact cube) for "world chess", an obvious extension of the Eurasian theme from two to three types of simple piece per group. It leaves it open as to whether you wish to interpret the "third continent" alongside Asia and Europe as North America (continents surrounding Arctic) or Africa (continents of antiquity). 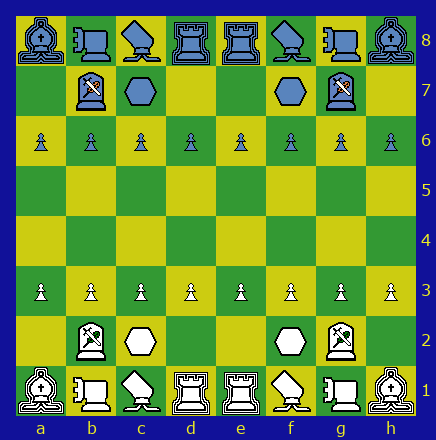 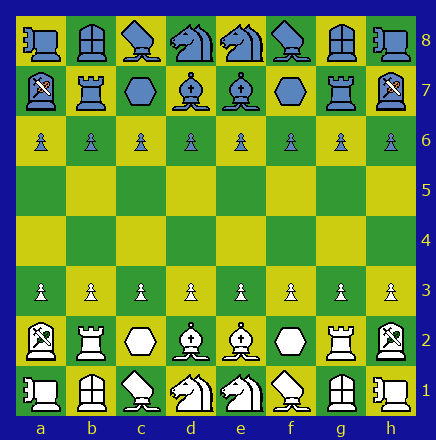 Levels u and x 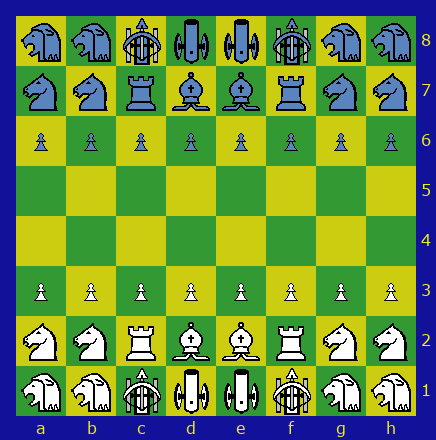 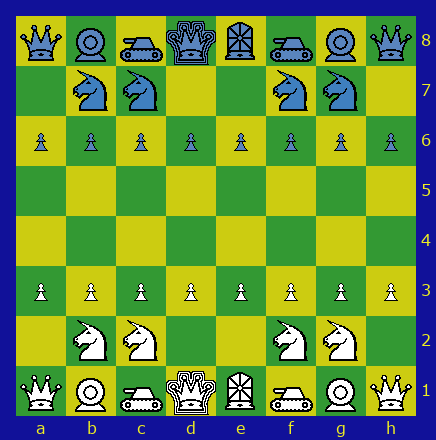 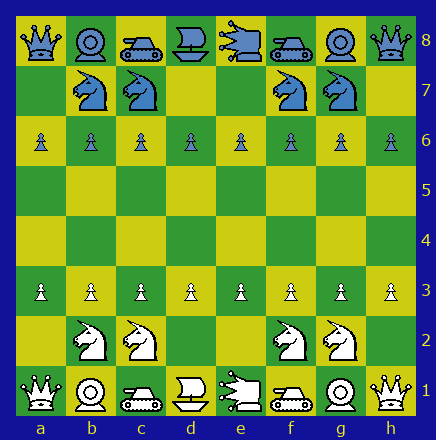 There is no initial double-step move or En Passant, as Stockbrokers start on the 3rd of 8 ranks.

The Emperor may Castle with a Queen or Duchess on the same orthogonal, or Cathedral with a Governor on the same diagonal. Both pieces must be previously unmoved, the Emperor moves 2 steps with no part of its move in Check, the other piece moves to the midpoint of the Emperor's move, and there must be no intervening pieces.

No triple compound may cross between the fourth and fifth ranks. This is inherited from Wildeurasian Qi, but is a lesser restriction as triple compounds are so tiny a proportion of each army. Stockbrokers crossing the same boundary are promoted to Stockfwazirs, an exact analogue to WEA Qi's Pawn-to-Wazir promotion.

A Stockfwazir reaching either end rank can optionally be further promoted to any symmetric piece previously captured by the enemy, except that promotion to a triple compound is available only after the longer trek to the player's own end rank.

Check, Checkmate, and Stalemate are as usual. In addition, the two Emperors cannot occupy the same file or diagonal (standard or nonstandard, but necessarily not same-rank) without an intervening piece.

Pieces can be represented by 14 (112/8) FIDE sets: 2 distinguishable sets and 3 distinguishable groups of 4 identical sets. The distinguishable sets should be the largest as they represent stronger pieces relative to their face value. Representations include:
* Triple compounds by large-set Kings and Queens;
* 3 kinds of pairwise compound by large-set paired pieces, ignoring the difference between the two sets;
* the other 6 kinds by small-set Kings and Queens;
* simple pieces by small-set paired pieces;
* Stockbrokers by Pawns from two small sets, ignoring the difference between the two sets;
* Stockfwazirs by remaining Pawns with the hope that they do not run out!

This game might inspire others, by myself and/or others. A development of the Knight-Sexton-Ninja threesome is the Rhino-Navvy-Thug one of Blocschach. I have since devised the names Churchgoer/Gangster/Puck for their pairwise compounds. See Man and Beast 09: Mighty Like a Rose. These would most likely be used to the exclusion of the Knight group. A group of third-perimeter-only mutlipath steppers complements the second-perimeter-only leapers, but if you wish to use these in a variant I recommend getting permission from George Duke first. These are the Falcon/Vulture/Kite, their pairwise compounds Merlin/Kestrel/Osprey, and triple compound Eagle. See Man and Beast 13: Straight and Crooked Moving. These pieces are not exhaustive as the Falcon covers 3:1:0 and 3:2:0, the Vulture 3:1:1 and 3:2:2, and the Kite 3:3:1 and 3:3:2 but none 3:2:1. The colourswitching Vulture particularly complements the colourbound Sexton. Purely Bent pieces do not lend themselves to this kind of grouping as they extrapolate to six or more simple piece types as long and short stages are distinguishable. The only way round that is to use the Gorgon/Mechanic/Laypreacher as "simple" pieces, but I have yet to devise names for their compounds!