The Xiang Qi army has always been regarded as weak, which could be why there has been so little attempt to extend it to 3d. The XQ Elephant suffers particularly on a cubic board. The 7 cells out of a 5x9 side of the River (about 2 in 13) extrapolates to 13 on a 5x5x5 half of a cubic board (about 2 in 19). Even an Elk (Elephant plus the 2:2:2 Eunuch) gives the same number of cells as a Dabbaba, 27 (about 3 in 14). For years this delayed my own attempt at a cubic Xiang Qi.

Then I had a brainwave. Expanding to 3d triples the number of possible oblique pieces, so I decided to dispense with non-coprime steppers altogether in favour of stepping forms of all three of these. It is the fact that the extra two are triaxial that gives the variant its name. I also decided to expand orthogonal pieces to Queenwise to maintain only one type of radial lacking long-range pieces (and bring in the King familar to non-Chinese). An alternative would be to add Yang Qi diagonal pieces, but I did not want to either increase piece density too much or lose the symmetry of the XQ board.

The 10 ranks are 5x5 boards laid vertically. Note that each King is in the middle of its rank. Note also how Barons are brought forward relative to where the XQ Ferz starts so as not to obstruct Knights' defence of Sextons from Cannons - an analogue to Rooks defending Knights in XQ. 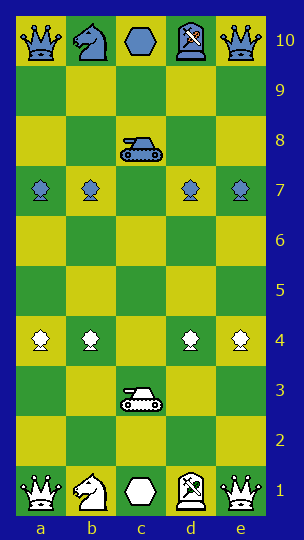 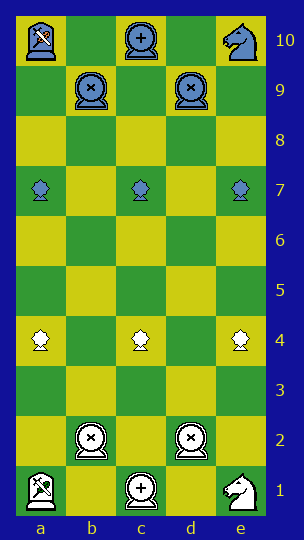 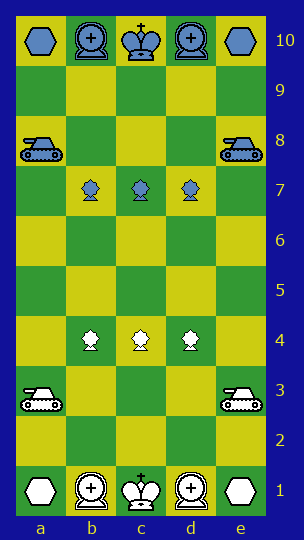 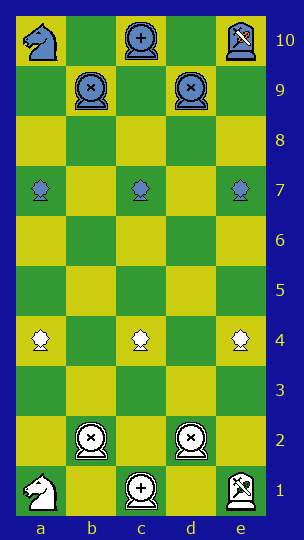 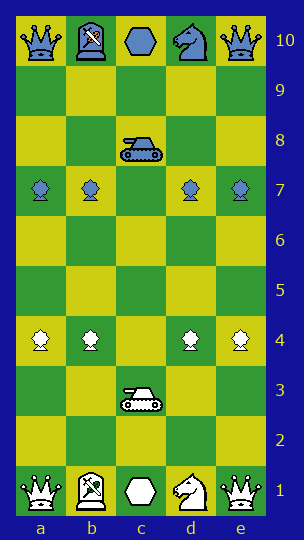 The 3x3x3 cube of cells at the centre of each player's first three ranks forms a Fortress which King, Dukes, and Barons must not leave. In addition Kings may not share a file without an intervening piece.

When a Princeling crosses from its own half to the enemy half it is promoted to also move one step along any same-rank orthogonal or diagonal, 4 of each. This applies for the rest of its time in the game.