This page is written by the game's inventor, Glenn Nicholls. 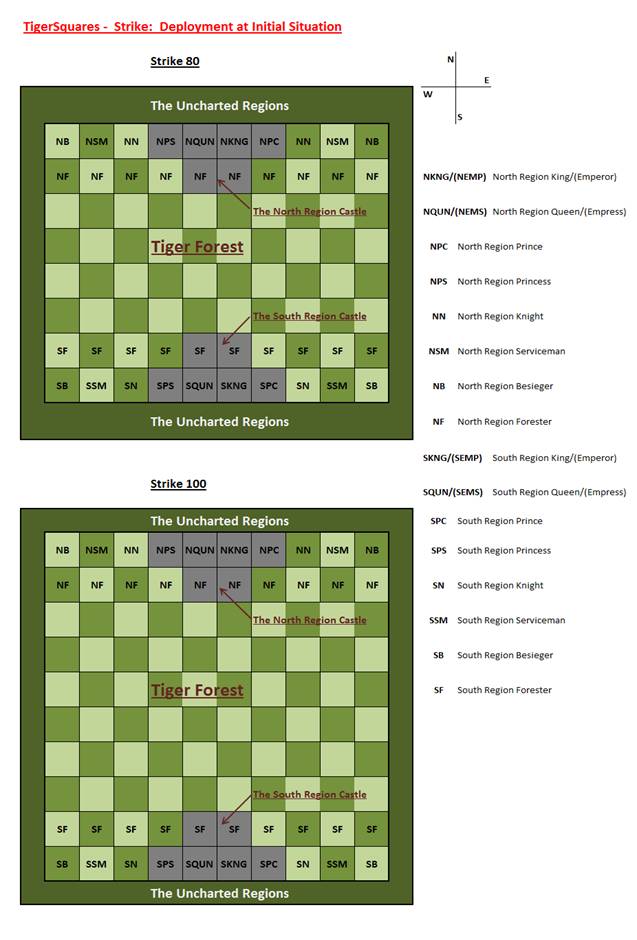 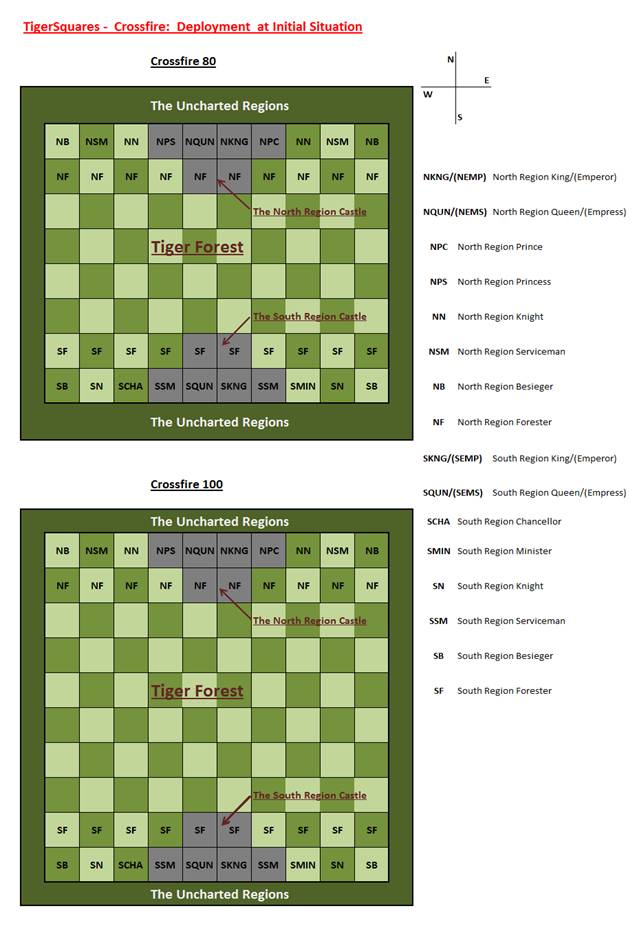 Notes: â€¢ The four variations are as described above i.e. Strike 80, Strike 100, Crossfire 80 and Crossfire 100. â€¢ Squares are called Squares and not Positions as in some games. â€¢ Squares in each of the Castles can be called (North or South) Castle Rooms. â€¢ The designation of Squares is that files are designated A to J from west to east and that ranks are designated 1 to 8 (or 10) from south to north. â€¢ At the commencement of the game, the Southern player (Guardian) has the choice of whether to play the Strike pieces or the Crossfire pieces. After this choice, the Northern player (Guardian) then has the choice of whether the game is played on the 80 board or the 100 board. If the Southern player does not make a choice then the Strike pieces are played and if then the Northern player does not make a choice then the 80 board is used. â€¢ The two Castles each consist of the six Squares (Rooms) coloured grey situated at the North and South of Tiger Forest. They have many maze-like corridors and passageways (some unknown and some underground). Only the Queens/Empresses know all the intricacies of their own Castles. Some believe the Castles to be haunted. â€¢ Castles do not impede or affect the movement or capturing powers of any piece except the Queen/Empress as explained later. Overview: The time is that of pre-Citadel, which is itself pre-The Great Change and pre-TigerChess, which is itself post-The Great Change Tiger Forest is unknown to any but the inhabitants who live there. These inhabitants have always found the Forest to be ideal for all their requirements and there has never been any conflict despite a broad grouping of inhabitants with differing cultures and ideas at the North and South Regions of this huge Forest, and each of these groups of inhabitants have their own Castle and their own King, Queen and so forth. There has come a time, however, when all feel that the Uncharted Regions should be explored with a view to cultivation of such resources as may be found there and in addition to this there are those who feel an organisation should be set up to protect and guard the Forest, its wildlife and any expansions to the existing regions and future cultivation thereof, and that this organisation should be called â€œthe Order of Tigersâ€ after the name of their Forest. Time has passed and the idea of this organisation has become ever more popular and an initial organisation has been formed from both regions and which both regions support and have passed legislation in support thereof and the Order has become an independent organisation. Still more time has passed and further legislation has been passed and it has now become apparent that the â€œOrder of Tigersâ€ has acquired power and wealth to match any other grouping in the Forest. Finally all those of the Forest have decided to appoint a Guardian (or Guard) as initial head of the Order who is to watch over and regulate the activities of all of the Forest and its surroundings, and it is seen and accepted that this Guardian would have vested in him more powers than any individual in the entire Forest. Each region has proposed a candidate Guardian and each candidate has received a great deal of support from their own region but has garnered little support from elsewhere. No compromise has been forthcoming and both regions will only accept their own candidate and so a drift to conflict has begun and now after much heated debate both sides have finally marched to Battle to decide who will become the Guardian of the Forest and be known as the TigerGuard. Object: The object of the game is to Checkmate the opposing Queen/Empress and this wins the Battle. 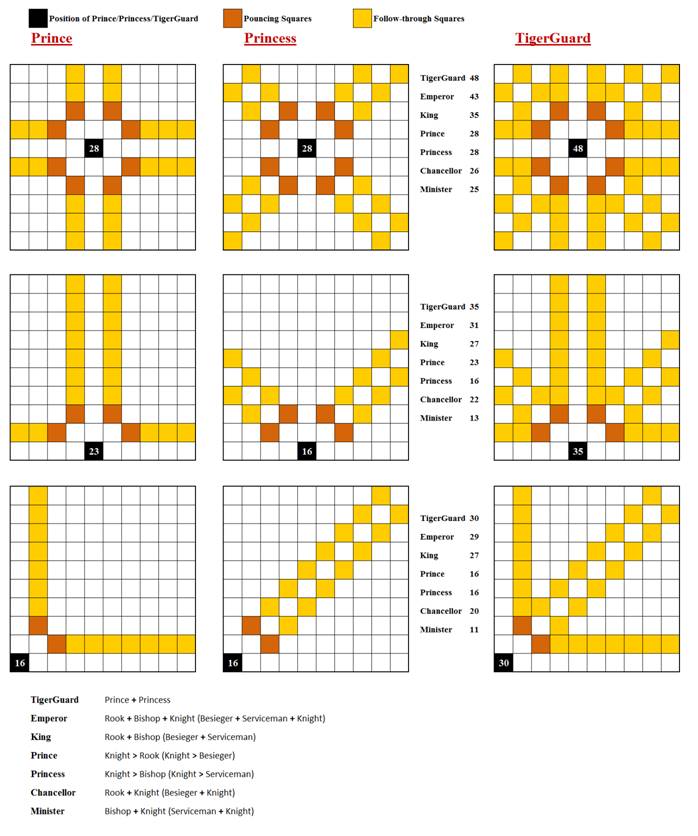 General rules & notes: Much of the game is played with generally accepted rules and best practice of Western Chess. The following apply: â€¢ South moves first and moves are then played alternately by each side. â€¢ Main colours are orange & black for North with small amounts of light green and white & black for South with small amounts of dark green. â€¢ Clocks are TigerClocks â€“ double countdown. These clocks are described in TigerChess and are somewhat based on Fischer clocks as are TigerIncrement Clocks as described in Dragon. â€¢ Boards should be much larger than standard chessboards. â€¢ Players should state Check if the opposing Queen or Empress is under attack though this is not compulsory. â€¢ The game points scores are as shown in the table below. The idea when playing Crossfire is that the Capablanca pieces are somewhat at a disadvantage and so move first as South and an extra point is awarded for a win by South, but by way of balance draws only score a half point for both sides. The idea when a Queen Traverses her Castle and becomes an Empress is that the opposing player then has a harder task to Checkmate the (now) Empress and so is awarded an extra point for the win and the Traversing player also has an easier draw and so has a half point deducted if he draws. 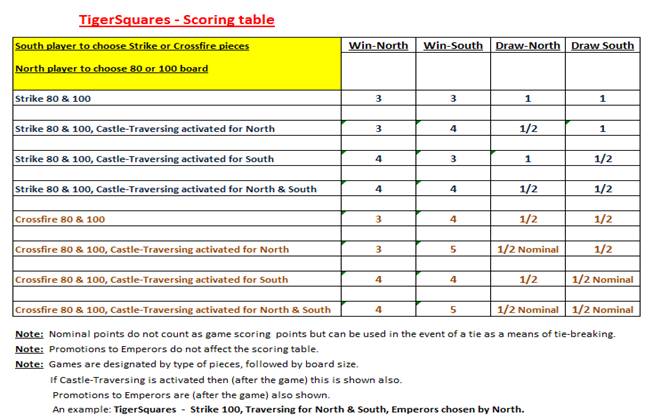