This page is written by the game's inventor, Fredrik Ekman. This game is a favorite of its inventor.

The game Thuria Jetan was first published in the book Jetan: The Martian Chess of Edgar Rice Burroughs (McFarland, 2022). By decreasing the size of the board and making the chief and princess less agile, it removes or decreases many of the problems that players have experienced with jetan. Thuria Jetan was developed by Fredrik Ekman and playtested together with Kerry Handscomb. 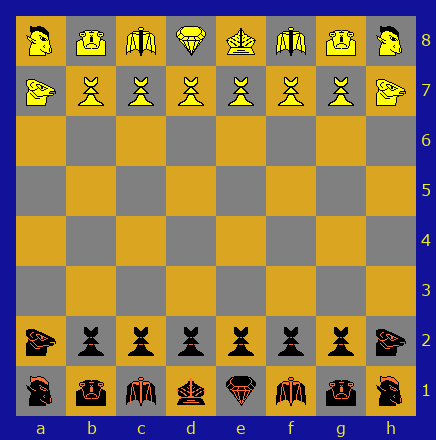 The thoat moves first one orthogonal and then one diagonal step. The thoat therefore must change direction, and its second step is either 45 or 135 degrees compared with its first step.

The flier moves three diagonal steps. It can jump.

The princess moves exactly the same as the chief: two diagonal or orthogonal steps, or a combination, but it cannot capture. The princess can jump. It must not end its move on a square threatened by an enemy piece. When in direct threat from an opponent piece, the princess must move away (if possible), unless the threat can be voided in some other way or unless the opponent princess is already under threat. The princess has one special move, the escape (see below).

Piece Movements. Each piece can move one, two or three steps from one square onto another, according to its description. The piece must always move its full count of steps. A piece either moves orthogonally or diagonally, or a combination of both, again according to its description. A piece that has started to move in one direction may at any time during its move change direction. For example, a three-step piece may change direction zero, one or two times. A piece may not double back and may not cross or alight on a square previously visited during that move, including its starting square. Pieces may not move across squares that are occupied by another piece, unless the moving piece can jump. Jumping pieces can move across squares even when occupied by their own or enemy pieces. A piece may never move in such a way that, by the execution of such a move, its own princess is put in direct threat from an opponent piece, even if that move would otherwise win or draw the game.

Repeated board state. The exact same board state must not occur more than twice during twelve successive moves, six by each player. If the player about to move risks creating such a repeated state, he must make a different move. Likewise, it is not allowed to put the opponent in a position where the only legal move creates such an identical state for the third time during twelve moves. Thus, if it is discovered that a player must make such a forced move, the other player must take back his last move and make another.

The Escape. The escape is a special move, which may be used once per game by each player. During the escape the princess can move seven steps, so that it can be positioned on any non-threatened and non-occupied square on the board. The escape can be made even when the princess is under direct threat.

Major win. The game is won when a chief captures the other chief, or when any piece captures the princess, or when one player manages to put the other player in a stalemate position (no legal move can be made). This is called a “major win,” and in tournaments or when playing a series of games, a major win gives three points.

Minor win. Capturing a chief by any other piece than the other chief results in a minor win. In tournaments or when playing a series of games, a minor win gives two points. If both players agree, the minor win could be a draw with one point awarded to each player.

Drawing. The game is drawn, i.e. neither side wins, when both sides have been reduced to so few pieces that both players agree that the game can no longer be won, or after fifty consecutive moves without a capture. In tournaments or when playing a series of games, a draw gives one point to each player.