This is an external link to another inventor's variant. Descriptions of the rules include a Wikipedia description and an in-house description.

I include it as it has a better chance than most variants of gaining a following beyond the readership of these pages. Its real history is that its rules were written by Trevor Truran to go with references in the latest works of Terry Pratchett (whose honorary doctorate at Bath I mention in Avon). Its history within the storyline of those novels is that it was invented by Dwarves and Trolls to replicate a historic battle - and avoid further real fighting, of which there has been all to much - between the two.

As I could find no array diagram for this game itself on the internet (although one exists for a subvariant by the same inventer using only half the Dwarf army) I feel entitled to include one here.

The centre square is permanently occupied by an immovable object, and therefore equivalent to a missing square. Note that although the Dwarf army (shown here as White) outnumber the Troll army (shown here as Black), Trolls have greater capturing power. In any case, players are expected to play games in pairs, one each as Dwarves as one each as Trolls. 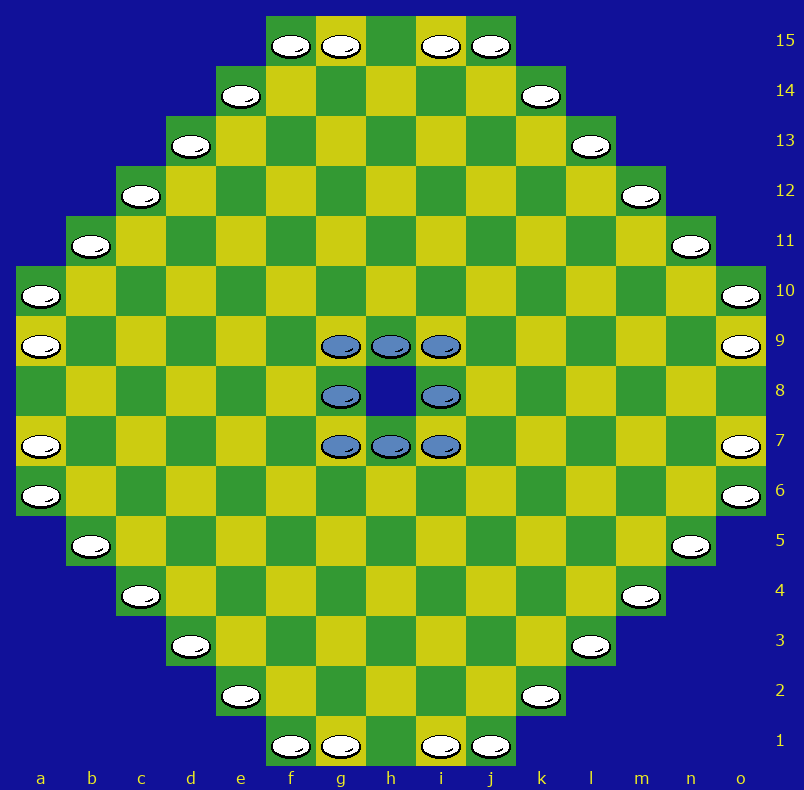 Other interesting links relating to this game include guidance on strategy and an ongoing discussion of gameplay.

The rule about playing two games with the players changing armies is slightly reminiscent of the swap between batting and fielding teams in the Cricket-Baseball family of ball games.

Since posting this I have read that a Thud tournament, or something of the kind, was set up in Wincanton, near the Somerset-Dorset border, that might become as a regular and distinctive feature there as the Circular Chess one is for the city of Lincoln.

Two of my own variants, Dartboard Chess and Vimes Chess, also refer to these novels and their hero's attitude to games.