This page is written by the game's inventor, Adrian Alvarez de la Campa.

This variant attempts to add an unorthodox piece to the FIDE array, while maintaining many of the same opening possibilities as standard Chess. The new piece is called a Templar, named after the Knights Templar, the Christian military order. I hope the name is suggestive of the Templar's two-square Bishop move as well as its cross-shaped leaping moves (two squares orthogonally). The piece graphic may represent a shield or a chalice (i.e. the Holy Grail) and is adorned with the Cross of the Knights Templar. 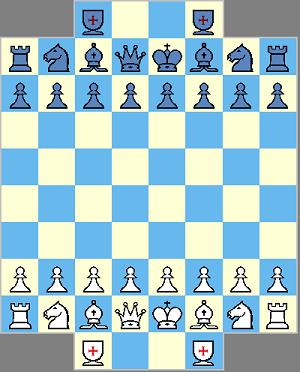 The Templar is a colorbound piece which may move two squares in any orthogonal direction (jumping over any intervening piece) or slide one or two squares diagonally (as a Bishop).

All standard chess rules apply except that castling is not allowed.

Even though the Templar is colorbound and limited in range, Zillions values it a little higher than a Rook.