On first seeing William Overington's Tree Garden Chess in 2003 I made a few comments, including suggesting the idea of a Golf-themed "Tee Garden" Chess punning on the name of someone in the news at the time. Nothing came of it then, and I forgot about it.

Then in 2006 as I was typing away quickly at a Shogi variant, I cannot offhand recall which, I produced the typo "Golfgeneral". I corrected it, of course, but not before it had planted in my mind the idea of applying my long-ignored idea to Shogi. Shogi already had reintroducing captured pieces as an alternative to moving a piece, so adding Golf actions as a further alternative seemed less of a change than adding them to a non-Shogi variant.

I have used the feature option of defining tailored rank and file labels and tiling here to create double-height ranks with pieces in the cell's upper part and numbers of golf balls in its lower part. The tee cells are not marked as they do not vary. 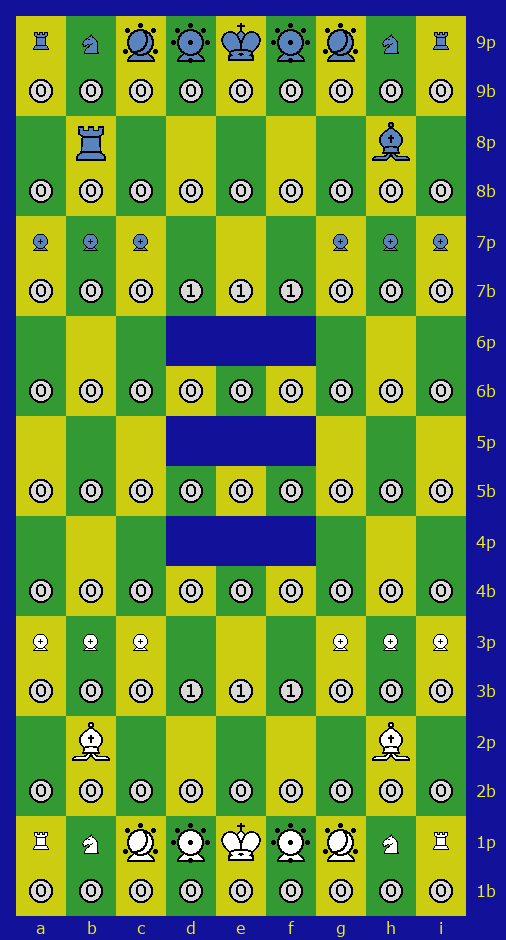 Pieces may not move directly from a middle file (d-f) to a middle rank (4-6) or vice versa. Bishops, however, may move from one to the other if one or two intermediate squares are in neither.

There is no initial double-step move, En Passant, or Castling or other special King move.

Promotion is as in Shogi.

Each player has a Reserve to store captured enemy pieces and pieces of either army hit with a ball. These pieces may, in place of the capturing player's normal move, return to the board as part of their army. In addition to Shogi restrictions on this, pieces may not return on files d-f, nor Helms on the squares c1/c9/g1/g9.

No piece can carry a ball with it as it moves.

Equipment: a Shogi set, six counters to represent the Golf balls, and one die (singular of dice).

Is it cheating to base giving one of the pieces a Golf move on a name that I coined for it - the Wing-Swing pun? I would say no. It is a name that I have been applying to that piece since Mitregi and Tunnelshogi, as part of a family of similar names for forward-only pieces. The name therefore came years before any idea of associating piece names with Golf strokes. The pun also has echoes of quite another sport, as in the Rugby Union singing of Swing Low, Sweet Chariot, a reminder of the Wing's original Japanese name. Since posting this variant I read that the name Rugby, for the Warwickshire (second W silent) town at whose school the latter ball game was invented, is a corruption of "Rookborough", meaning a fortress with rooks. So it all links back to the original chariot in its symmetric form and that piece's modern shape!