This variant was inspired by the idea of increasing the number of cells within the Xiang Qi Fortress to 6x6 so that stronger pieces can operate entirely within it, but without increasing the space occupied by it from the 3x3 on the original board. This suggested to me the Tardis, a spacetime vessel bigger on the inside than on the outside in the British science-fiction television series Doctor Who, so I also allowed it to move under certain restricted conditions. I decided to disable the time-travel feature as that would complicate the game too much. As interiors of Tardises could be considered separate board levels I have left blank the specified number of dimensions. Taijitu indicates use of Xiang Qi symmetric pieces, their orthogonal/diagonal duals, a King, and leaping Knights. It also alliterates nicely with Tardis.

Subdividing the original Xiang Qi board into cells inside and outside any Fortress gives 2*(3*3)=18 inside cells and 90-18=72 outside cells. Multiplying the inside cells by four balances the latter with 18*4=72 inside cells. The fact that this adds up to a square number is pure accident, as there is nothing square about the board in any sense save for the shape of individual cells.

The diagram below shows first the Black Tardis, then the main board with the Tardis-occupied area shown as missing, and finally the White Tardis. Array influences include Fergus Duniho's variants Eurasian Chess and Yang Qi, and my own Wildeurasian Qi and Taijitu Qi. 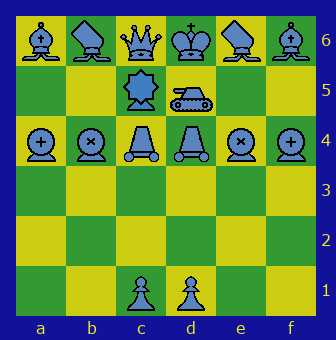 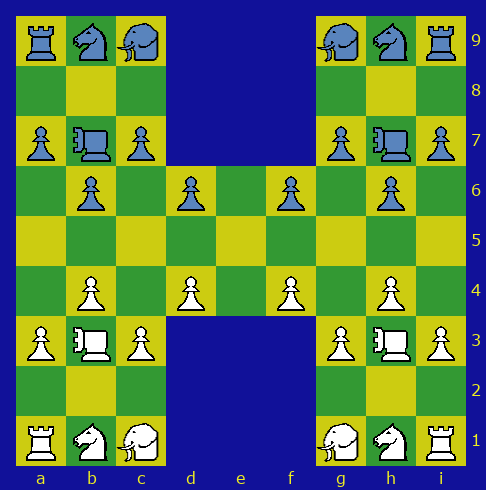 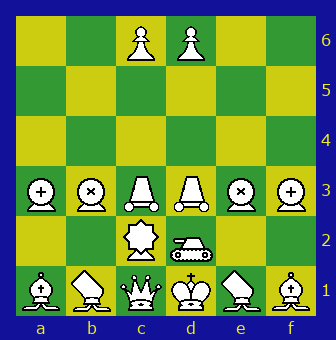 On entering a Tardis, each file or rank splits into two adjacent ones, which reunite if and when they emerge from the Tardis. A piece moving orthogonally may follow either of the pair on entering and must follow the combined one on emerging. A piece moving diagonally through the corner of a Tardis can do so only along the obvious route. A piece moving diagonally through a cell orthogonally adjacent to a Tardis may do so through either two opposite corners of that cell, or one of the non-Tardis corners and halfway along the Tardis-bordering edge. A Knight move is considered an orthogonal step followed by a diagonal one, although unlike the XQ Stepping Knight the intermediate cell need not be empty. This feature unbinds Bishops, Arrows, Dabbabas, and Elephants. It also allows Gryphon-like parallel forks from pieces usually lacking them.

In place of a normal move a player may move the entire Tardis containing their King to swap place with any completely empty 3x3 block of non-Tardis cells, except one newly vacated by the Tardis containing the enemy King (which may be the same Tardis or the other one). The game starts without any such blocks. It may swap to the other side of the River, or even to a position straddling the River, which does not move but remains in place beneath the Tardis floor. Should the Tardises adjoin, pieces move across the border as if within a sigle Tardis.

The King may Castle with either Rook along the route that remains the back rank through the Tardis. This involves the King moving to the rear corner of the Tardis and the Rook to the orthogonaly-adjacent back-of-Tardis cell. Both pieces must be previously unmoved (a move by the entire Tardis counts as a King move), all intermediate cells empty, and no cell of the King's path threatened by an enemy.

Kings, Queens, Tanks, Wazirs, Ferzes, and Princes cannot move to or through a non-Tardis cell, but may move from one Tardis to the other if the two are adjoining and at least partly on the same side of the River. Dabbabas and Elephants may cross the River within either Tardis, either using it as a bridge or by the Tardis itself moving, but not do so outside one. Alibabas may not enter a Tardis until further promoted, but may cross Rivers outside it.

I hope that my replacement of the stationary Fortress with a moving, and internally larger, Tardis has overcome some of the criticisms of my other restricted-compound Xiang Qi variants, while if anything making for a variant even closer to Xiang Qi itself. Compound pieces remain confined to half the cells, as in Wildeurasian Qi, but here they are to the same half rather than opposite halves. This leaves open strategies not available in my other variants. For example, a player may bombard the enemy Tardis with simple pieces to capture the Queen and Tank, and then bring the two Tardises together to attack the King with their own Queen and Tank.

The pieces can be represented by three distinguishable sets. I suggest using arge back rank and medium/small Pawns as themselves, medium linepieces as hopping-capture pieces, small linepieces as one-step, medium Knights as Dabbabas, small Knights as Elephants, large Pawns as Alibabas. The board will have to be specially made.

Is there any significance in a Tardis-confined Queen having the same move as Poison Chess' Doctor? Perhaps not: the first series of Doctor Who gave the title character the line "I am not a doctor of medicine" - whereas the Doctor in Poison Chess is one.

If anyone has ideas for incorporating time travel in a not-too-complicating way I would be interested to read them.