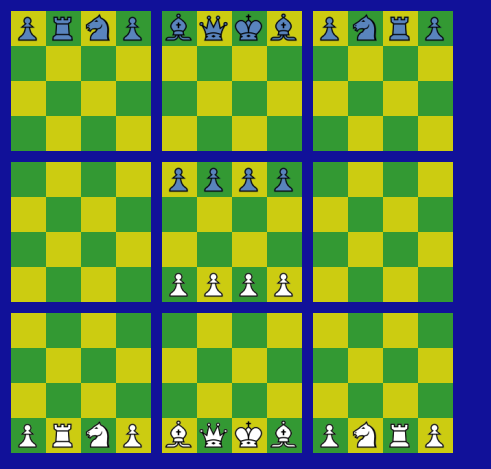 The board consists of a 3x3 array of 4x4 chessboards. Parton labelled the small boards a-i, reading through the diagram as in English (a,b,c left-to-right in the first row, d,e,f second row, g,h,i third row), and squares inside each small board 1-16 in the same fashion. Concatenating the two labels then gives a unique name to each square (for example, the kings are on b3 and h15).

All pieces move either on their current small board or between boards to a corresponding square of a new board. That is, they change either the letter or number (but not both) in Parton's labelling scheme.

Except for the knight, every piece moves within their board or between boards (treating the 3x3 array of boards as its own chessboard) as they would in FIDE chess.

The knight, renamed a "centaura" by Parton, moves within its board as a FIDE knight but between boards as a queen.

Pawns do not have an initial two-step, so there is no en passant. Pawns promote upon reaching the forwardmost rank available (a-c 1-4 for white, g-i 13-16 for black).

In addition to checkmate, a player can win by giving perpetual check.

Parton also describes Losing Sphinx Chess (captures are mandatory, goal is to lose all pieces, no check); given the difficulty in achieving checkmate in Sphinx Chess, the Losing version may play better.

Here at CVP we have a transcription of Parton's pamphlet where he describes Sphinx Chess: text