This page is written by the game's inventor, Bn Em.

There have been several attempts to devise variants on a spherical board. These often differ in their method of adapting the board to a sphere, but all attempts to date leave, in my opinion, something to be desired, from a mathematical perspective. This is an attempt to rectify that situation.

Currently attested ‘spherical’ variants tend to adapt the square board by making ranks and file correspond respectively to lines of latitude and longitude. This works for most of the board, leaving only the poles with non‐obvious solutions. I have seen three approaches to the problem:

However, none of these is unproblematic. The first option is, as noted on the Spherical Chess page, completely equivalent to the usual cylindrical chess, and doesn't really merit the name ‘spherical’; the second also turns out not to give true (topological) spheres: the simplest of the games on that page, Leo Nadvorney's, has cross‐caps at the poles, making it topologically a Klein Bottle, while the others do more elaborate things with the diagonal and oblique moves (thereby making diagonal steps not always equivalent to a pair of orthogonal steps at right angles, and/or making directions change at the poles). As for the third option, having a space which is orthogonally adjacent to more than four others (and in the case of Spherical Chinese Chess an odd number of others!) makes defining rook moves nontrivial, and the choice to have diagonals go through it as well is, in mỹ opinion, something of a kludge, as well as failing to truly avoid also becoming a cross‐cap, albeit this time in the middle of the square.

Which leaves the question: can a square board be adapted into a genuinely spherical one? As it turns out, it can: the sphere does, in fact, have a fundamental polygon which is square in shape: a sphere can be formed by joining the pairs of adjacent edges of a square, and in case geometry rather than just topology is in question, warping the surface appropriately.

However, applying this transformation to the usual face‐to‐face variants runs into an issue: each army is threatened from behind by a few of the opponent's pieces — in the case of the Western Orthodox array, (formerly) diagonally opposite rooks and knights, a bishop and rook's pawn, as well as both queens, begin under mutual threat, making the initial position tactically non‐quiet. On the other hand, corner arrays, while significantly less common, do not have this issue, and indeed seem to work quite nicely on such a board. As such, such arrays are presented below to showcase the corner‐pole spherical board.

It may be noted that, similarly to Ralph Betza's Three Kinds of Billiards Chess, there are two places we can put the join: the obvious way is to have it line up with the edges of squares, making, for example, e1 orthogonally adjacent (on the usual 8×8 board, with the first and last rank joined to the h and a files respectively) to h4 and retaining a total of 64 squares. However, we can also have the join running through the middle of the edge squares! Doing this has some interesting effects: the first rank and h file (and the last rank and a file), rather than being merely adjacent, become (each) one file! Meanwhile, a8 and h1 become the poles of the sphere rather than merely sitting next to them (and themselves), and the number of spaces shrinks from 64 to 51. Arrays for both kinds of adaptation are included here. 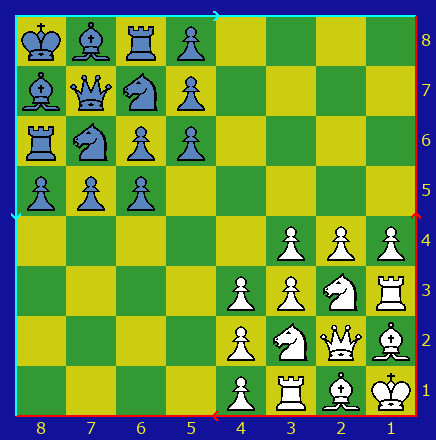 The setup is modified from Charles Gilman's Batturanga, replacing the Chaturanga pieces in that variant with their modern counterparts; this setup can be played with the usual equipment (minus a pawn aside). While the bishops appear to be on the same colour, the topology of the board in fact unbinds bishops completely, and as such no contrivances such as Adjustment Rules or noncapturing orthogonal steps are necessary.

The board is a spherical one, formed by joining the first rank to the h file and the eighth rank to the a file, as indicated by the setup diagram. The following diagram, analogous to the one given for Nadvorney's ‘spherical’ variant, shows the regular Chess board in the middle, and around the edges, it shows the spaces that may be reached by orthogonal, diagonal, and Knight moves that move away from the edges for up to two spaces away.

As in Gilman's Batturanga, “Forward” is defined as the orthogonal most directly away from the King's starting square. The Pawn on the Central Diagonal can make a noncapturing move in either direction, and capture on any diagonal except toward its own King square. If it actually captures toward the enemy King square it retains that flexibility, but upon moving off the long diagonal it behaves like the three starting that side of it.

Pawns may promote to any array piece upon reaching a space that shares an orthogonal with the opposing King's starting square, whence stepping forward would cross the join. As they start so close to promotion already, pawns lack an initial double step.

Castling, though perhaps of questionable utility, is as usual; the king moves two spaces.

The setup is adapted from Charles Gilman's Doubleback Corner Chess. Due to the changes in the board, a naïve translation eliminates two of Gilman's rooks, and one aside of queen, pawn, and bishop. While the former two, owing respectively to their strength and number, require no compensation (the rooks and queen are, indeed, returned to their orthodox numbers), having three(!) bishops and four knights is perhaps less then desirable. I have elected to replace one knight and one bishop aside with a pair of camels: like the bishops, these are colourbound (something this version does not alleviate) but begin next to each other and so on opposite colours; like the (still three, for lack of inspiration as to a single substitute) knights, they are poised to develop quicky (one can move immeiately if desired), but cannot immediately make any dangerous threats (only pawns, defended by knights, a rook, and a bishop are at any risk from them initially).

The board is spherical, formed by identifying the first rank with the i file and the ninth rank with the a file, with an equivalent join indicated by the setup diagram. The following diagram, as above, shows the regular Chess board in the middle, and around the edges, it shows the spaces that may be reached by orthogonal, diagonal, and Knight moves that move away from the edges for up to two spaces away; the outer ranks and files are highlighted to show the identification.

As in Gilman's corner variants, pawns may make either orthogonal move away from the king's starting square, or capture in the most directly‐away diagonal direction; the pawns beginning orthogonally aligned with the king may make any of the three moves or two captures acailable to it until it leaves that orthogonal with a capture. Alternatively the familiar ratio of capturing to non‐capturing moves may be restored by substituting berolina pawns.

Pawns behind the front Pawn diagonal have an optional initial double noncapturing move, on either orthogonal. In subvariants using berolina pawns, they have it on the diagonal toward the enemy camp.

Pawns may promote to any array piece upon reaching a space orthogonally aligned with the opposing King's starting square, whence stepping forward is only possible in one direction.

Castling, though perhaps of questionable utility, is as usual; either rook may be castled with, the king moving two spaces in either case.

The joins of the second variant in particular can be a bit unintuitive — it's worth spending some time with it. The first is, of course, not entirely trivial either; in particular the poles being thrice adjacent to themselves can be a little jarring.

Both orthogonal and diagonal moves trace out some unusual‐looking paths; the diagonals in particular look a bit like partially time‐reversed Billiards Chess moves, while the criss‐crossing rook moves remind me somewhat of Crazy 38's' loops. Contrary to what one might expect, a diagonal move along the equator doubles back on itself at the join. This is a consequence of the unusual layout of the squares on the spherical surface (laying out the board on an actual geometrical sphere is left as an exercise to the reader), but a subvariant allowing unidirectional equatorial movement may well be worth trying too, at least in the first variant where this is relatively unproblematic given the geometry of the squares themselves.

‘True’ claims to topological sphericity aside, this has an interesting set of tradeoffs compared to the variants with cross‐caps: the latter is only viable for adapting games with even numbers of files (of course the ‘true’ Klein bottle form can in principle be formed from any rectangular board — but not necessarily in a way amenable to chess), while the present board only works without contrivance (some squares with a board edge after all, etc.) for square boards, though of any side length.

There is a third possible way of placing the joins, besides the two mentioned above: place one join on the edges of squares and the other through the middle. This in effect adapts a board with non‐integer side length (such as square boards of side eight‐and‐a‐half(!)); doing so is at the expense, however, of equatorial symmetry, and as such designing a variant suitable for such a board is likely a non‐trivial affair however, whether with different‐armies corner arrays or equal armies facing across each other's paths.

Whilst, as stated above, most face‐to‐face setups do not suit this kind of board, Shogi's may be an exception: the flying chariot is hemmed in by pawns, the angle mover, and (twice!) by its own back rank, pawns cannot capture sideways at all, none of the back‐rank pieces ake any long‐range threats, and the left‐hand silver general, whilst it can enter the enemy camp and thereby (presumably) promote, cannot capture anything and would immediately be taken by either a pawn or an incense chariot; in the former case the gold general could retaliate, but the incense chariot is poised to avenge and even if the king takes that, I suspect the defending player has the advantage. Needless to say, further analysis would be necessary to see if spherical shogi is truly viable, but at least it needn't be dismissed out of hand.