This variant can be seen as continuing on from Anglojewish Chess, introducing Curved hex-radial pieces, and 4 Linepiece Hex Chess, mixing them with their Straight counterparts while upgrading AJ Chess' General to a Grandduke. Here I add Hopping-capture pieces as a third group, the Sling having its own Jewish connotation as Star of David 2 Level Chess describes.

It can also be seen as building on Liu Yang, my hex analogue to Fergus Duniho's Yang Qi. On the square board Yang Qi and its offshoot Eurasian Chess inspired my Wildeurasian (WEA) Qi, which added the combined Hopping-capture piece and made the Knight part of a third set of 2 each of 2 duals plus 1 of their compound. As the Hex analogy to square-board duals ill suits oblique directions, I eschew complementing the Sennight with the Overscore and their compound the Sedative, or using the otherwise skipped-over Aurochs, whose compound with the Sennight is as yet unnamed. Instead I looked to Curved radial pieces, which viewed this way are the third group.

This decision made me wonder whether to retain the Sennight at all, as the stand-alone piece that it is in AJ Chess and Liu Yang - and that the Knight is in the FIDE-Yang Qi-Eurasian-WEA Qi sequence. I retain it as it fits the Jewish strand of the theme and 12 piece types can still be accommodated within my planned representation by one large and - bound pieces here having three exhaustive and mutually exclusive bindings instead of the two usual in square-cell games - two small FIDE sets. In this scheme Kings and Queens represent compound pieces, large paired pieces orthogonal pieces, small paired pieces their hex-diagonal counterparts, and large and small Pawns Sennights and Brokers. A more economic representation uses 2 Shogi sets - Kings represent Granddukes, Rooks/Bishops/Golds orthogonal pieces, unpromoted paired pieces hex-diagonal ones, promoted paired pieces corresponding compounds, and promoted and unpromoted Points Sennights and Brokers. A 3-player subvariant could theoretically be played with 3 Shogi sets but would, I suspect, be rather too crowded.

The mix of 5 piece types with a Jewish theme (including all 3 Curved ones) and 2 standard Xiang Qi piece types inherited by Yang Qi et al (and extended here to 6 orthogonal directions) inspires the variant name. David Cannon has drawn my attention to Jewish comunities in China, and particularly the one in Kaifeng, east of Zhengzhou in Henan province. Members of these communities physically resemble, to Europeans at least, the general local population, although locals might spot subtle differences. Their appearance is due to interbreeding between small numbers of ethnic-Jewish migrants and an increasingly large proportion of indigenous converts.

Remaining pieces are typical Glinski and/or McCooey pieces using hex root-3 diagonals except for the Cannonade, the one really novel piece in a hex context - although my 3d Weltschach has its cubic form. For this last group I reuse names of cubic pieces using that geometry's own root-3 diagonals the same way, rather than names of square-board pieces. This is especially sensible for my Jewish-themed hex variants as the Star, and Megastar, of David variants include the Knight and Sennight together. 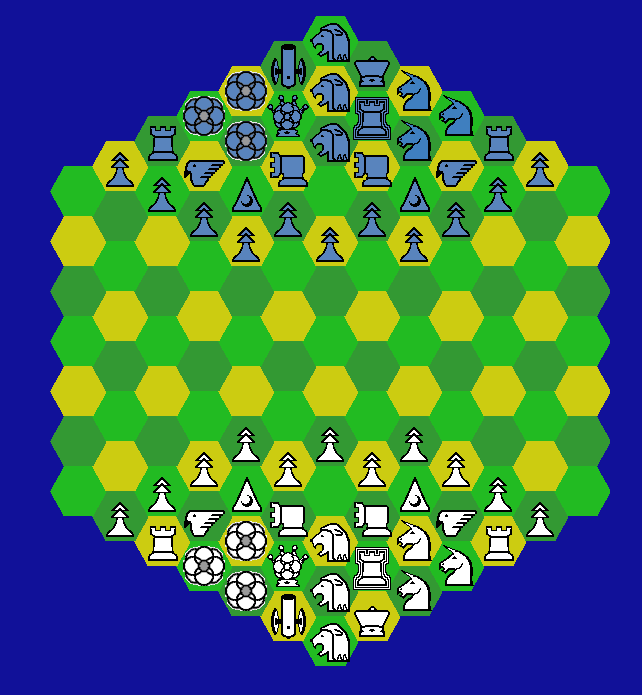 Steppers and leapers are a miscellany. Straight linepieces move any distance through empty cells. Straight Hopping-capture pieces differ from the above in that captures require a single intervening piece, which may be of either army and is not itself captured. Curved linepieces make up to 4 steps through empty cells, turning either 60Â° left at each intermediate cell or 60Â° right at each intermediate cell, never mixing left and right turns in one move.

Granddukes cannot share an orthogonal or hex diagonal without an intervening piece, or enter each other's camps.

Brokers reaching the board's far edge must be promoted to Duchess, Cannonade, Cohen, or Sennight. Underpromotion is not allowed. In the FIDE-set representation a second Duchess can be improvised from an inverted small Rook.

The appearance of members of China's Jewish communities has contributed the following joke to the already rich stock of Jewish humour:

A European delegation once went on a fact-finding tour of China. One member of the delegation, a devout Jew, grew to miss going to synagogue, until they reached Kaifeng. There he heard about the Jewish community and after asking around managed to get to one of their services. He was amazed. To his eyes, everyone at the synagogue looked like the ordinary Gentile population of the country. After the service the rabbi came up to him and said: "You're new to this synagogue, aren't you?"
"That's right," said the visitor, and explained how he came to be there.
"And you're Jewish yourself?"
"Oh, yes, as far back as anyone can remember. One of my grandmothers was raised a secular Jew, but her parents were both raised as synagogue-going, kosher-eating religious Jews."
The rabbi reflected on all this, before finally saying: "That's very strange, you don't look Jewish."