This page is written by the game's inventor, Henk Drost.

Makpong is a variant of Makruk where the King may not move out of check, except to capture its singular attacker.

The King may capture its attacker if in range. In the case of a double check, the game is automatically lost for the (now) checkmated side.

Makpong is designed to reduce draws.

Over the board it is used as tie breaker in Makruk single elimination tournaments.

This variant of Makpong simplifies away the unituitive counting rules of Makruk for a 50 move rule and 3-fold repetition.

The opening setup is very similar to that of orthodox chess, with the following differences: the positions of white king and queen are reversed, and all pawns are on the third and sixth row. So, the setup is as follows: 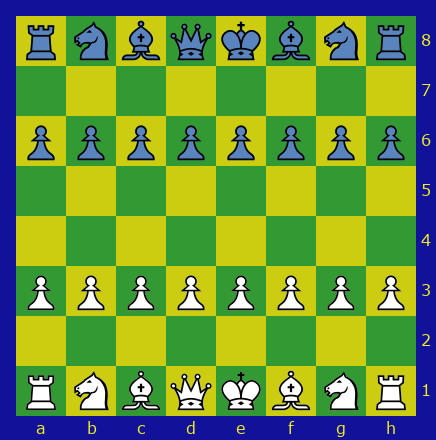 The king, rook, and knight move as in orthodox chess, except that castling does not exist in this game.

The bishop moves one square straight forward or one square diagonally. (Silver General in Shogi)

The pawn moves as a normal pawn, but may not make a double step on its first move. When it reaches the sixth row (third row for black), it promotes to a queen. (Ferz)

Object of the game is to mate the opponents king. Stalemate is a draw.

The King may not move out of check, except to capture its singular attacker.

Other pieces are free to move if the king is in check, provided it's legal to do so. (Either by blocking the attacking piece, or capturing it)

Unlike many other variants that try to reduce drawrate and opening bias by massively increasing the complexity, this variant achieves the goal by making the game less inherently drawish and actually reducing complexity. Testing with Fairy-Stockfish (both old handcrafted eval, and current nnue) shows very low draw rate and no opening bias.

This game has both strategical and tactical complexity.

Creating strong structures is a must to keep the king safe but the game can be over in a moments notice if someone misses tactics. Opening variety is high.

The knight is a scary piece.