This variant is something of a back-formation from Shoxiang QB162, which combines the Shogi set minus the middle rank with the Xiang Qi set minus the Fortress-restricted pieces. One of these variants uses the same pieces in an array punning on the Rook in the style of Wildeurasian Mitregi. This is the "Shogi-heavy" one. The other starts with the Xiang Qi set, treats the symmetric pieces as a sporting "first XI", and has a "second XI" of forward-only counterparts. This idea springs from a pun on XI as Roman numeral and start of Xiang, which also works verbally in English (eleven/elephant) and German (elf/elefant/elfenbein). The counterparts give essentially the same corner and adjacent pieces as in Shogi, so the entire 2nd XI may be represented by Shogi pieces. Both variants restore the Shogi Bishop.

Shogi divides the board into three equal-sized groups of ranks for promotion rules, and Xiang Qi into two for both promotion and restriction. This suggested to me that the expansion of the board to accommodate the larger armies should be by making the number of ranks divisible by both numbers while retaining the 9 files common to both. This gives 12 ranks by 9 files. 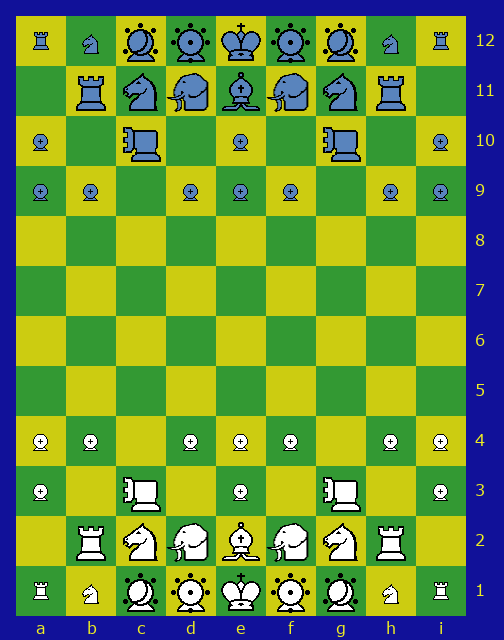 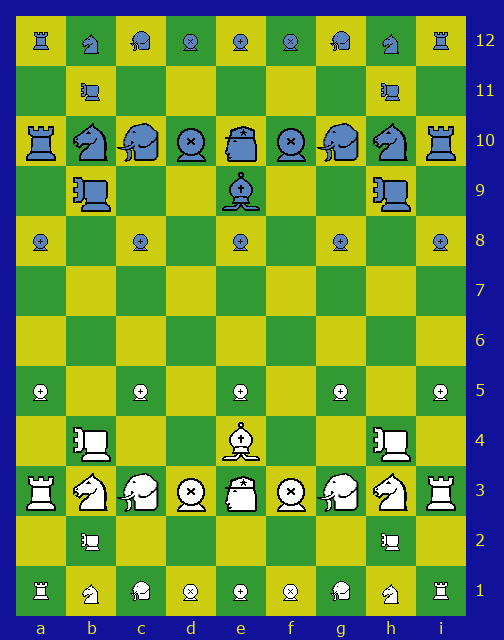 Shogi pieces have their Japanese name given in brackets, with a translation where differing from the Man and Beast name.

Points starting immediately behind another Point are patient as defined in Man and Beast 02: Shield Bewarers. This means that they have an initial double move once the front Point's square is empty and the one ahead of that either empty or enemy-occupied. A capturing double move is allowed as it is a non-divergent piece. Only a Cross can capture a Point En Passant, should it get that far.

In the Shogi-heavy variant, Shogi pieces (including Points but not Rooks) have their Shogi promotion rules. The promotion zone is in the four ranks deepest into enemy territory. Standard XQ pieces cannot be promoted.

In the XQ-heavy variant, the Fortress occupies the middle three squares of the first four ranks. Generals and Ferzes cannot leave it. Points and Crosses crossing the River gain a single-step sideways move, and on reaching the enemy Fortress are promoted respectively to Wazirs - moving like the General but capturable - and Ferzes neither of which can leave it. Other forward-only pieces are promoted to the symmetric counterpart on crossing the River. In both variants Elephants cannot cross the River. Tusks can, but once promoted cannot retreat back across it.

In both variants a player capturing a Bishop, forward-only piece, or part-symmetric piece may reintroduce the piece in unpromoted form as part of their own army in place of a normal move. It must be placed on a rank where it has a move in unpromoted form, and if placed beyond the River is promoted at the end of its next move. Rooks, Knights and Cannons cannot be reintroduced.

Check, Checkmate, and Stalemate are as in FIDE Chess. The XQ-heavy version also has the ban on both Generals sharing a file without an intervening piece.

Since posting this page I have been inspired to add a possible subvariant of each variant in which Cannons promote and demote while capturing. If the intervening piece is a promoted enemy it is demoted, unless demoting would prevent it moving further. If the intervening piece is an unpromoted but promotable ally it is promoted. The Cannon itself remains unpromotable.