This page is written by the game's inventor, wdtr2. This game is a favorite of its inventor.

Shako_Balbo is a chess game that is a fusion to two chess variants. The concept came after playing these chess variants. Special thanks should be Awarded to Aurelian Florea, Greg Strong, Fergus Duniho, Jean-Louis Cazaux, and M. G. Balbo for this game. 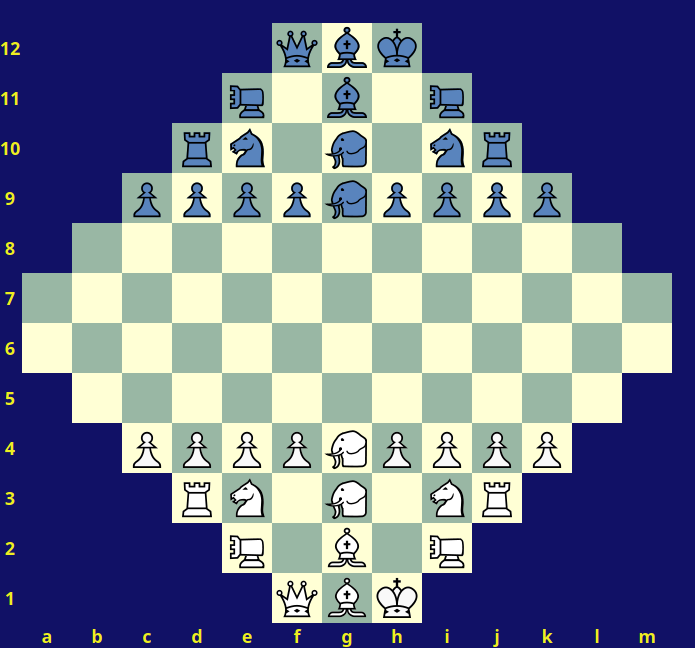 The chess pieces are the standard pieces with the addition of an elephant, and a cannon. The Elephant leaps 1 or 2 squares diagonally. The Cannon is a standard Chinese Cannon. It may move in an orthogonal direction. To capture a piece it leaps over 1 piece (white or black) and then captures the piece after the leap. The Pawns can do a 1 step or 2 step on the 1st move. En Passant is active, and pawn promotion occurs when the pawn can not go forward anymore. This means that position A7 is a promotion spot for a white pawn.

Any chess player familar with the rules of chess should be comfortable playing this game.

The rules of shako are found here

The game of shako can be played here

This game, invented by M. G. Balbo in 1974, is mentioned in Pritchard's Encyclopedia of Chess Variants.


The rules of Balbo's chess are located here

The game of Shako_Balbo can be played here