One subset of my variants comprises the "Nested" family: large variants which both players can theoretically ignore half the pieces and half the squares play as some smaller pre-existing variant until one decides, or is forced by what in the smaller variant would be Checkmate, to bring the remainder into play. So far these include Nested Chess, Nested Shogi, Nested Xiang Qi, and Doubly Nested Chess. What is new here is that the two players have a choice of which familiar smaller variant to play - although, just as with the rest, they have the choice of mixing and matching.

Although, as its name suggests, this variant combines disguised FIDE and Shogi arrays, inspiration came from the Xiang Qi board. The majority opinion still seems to be that the idea of Chess travelled from India (in the form of Chaturanga) to China (in the form of Xiang Qi) rather than vice versa. Following that assumpion, I wondered whether the board for the latter might have resulted from taking a Chaturanga board in two halves, with one midline thus repeated, and using the corners of Chaturanga squares rather than the squares themselves. Wondering what playing on both interpretations of the board at once would be like, I concluded that having to cope with no original squares in the middle of the River made for too complex a board. It then dawned on me that if combining 9x10 with 8x8 was too awkward, combining Shogi's 9x9 with 8x8 would be more straightforward. Thus what I ultimately used was the actual squares and corners of squares - and mid-edges as well to accommodate pieces holding the entire thing together - of an 8x8 board as a single object without the duplicate midline. I also decided to use modern, rather than ancient, Occidental pieces. 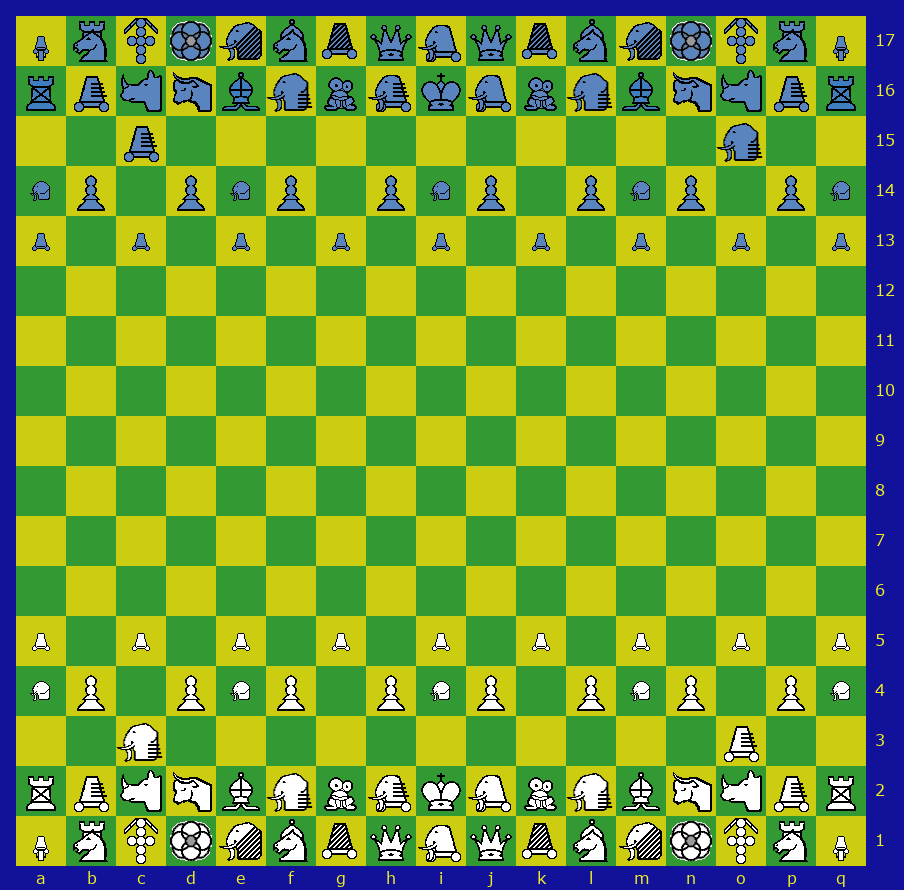 A Vanguard on its player's 4th rank (their rearmost possible one) may optionally make a noncapturing move four steps forward. The halfway square must be empty but other intermediate squares may be empty or occupied. They can however be immediately captured En Passant by enemy Vanguards as if they had leaped the usual two steps. This is the transformation of the FIDE Pawn double-step move.

The King and either Chatelaine, both unmoved, can Castle as long as all intermediate squares are empty, the King moving to the Primate starting square and Chatelaine to the Elephrider one. No part of the King's path may be threatened by an enemy at the time.

A Vanguard reaching its player's 16th rank can go no further unpromoted and so must be promoted to an Alibarider, Dabbarider, Elephrider, or Charolais. This is the transformation of FIDE Pawn promotion.

A Dabchick, Dabchrider, Calf, or Silverthief moving to, from, or within its player's 13th rank or beyond can be promoted to a Goldthief. For the Silverthief this is always optional. For the rest promotion is compulsory on reaching the 17th rank, and for the Calf the 15th as well. This is the transformation of Shogi promotion to Goldgeneral.

A Dabbarider or Elephrider moving to, from, or within its player's 13th, 15th, or 17th rank can optionally acquire all remaining Alibaba moves. This is the transformation of Shogi linepiece promotion. Note that evenbound Dabbariders and Elephriders, including those resulting from Vanguard promotion, never reach these ranks and so can never be promoted.

A Tusk reaching the 16th rank must be swapped with a symmetric piece from any of the three Reserves.

Check, Checkmate, and Stalemate apply to the real King as usual.