(c) May 2006 by Gary K. Gifford This variant makes use of a Royal Magician and a Magical King. When either one reaches his fourth rank, a Bishop or a Knight is dropped onto the board (as part of their magic). When either one reaches their fifth rank the Knight or Bishop (whichever was not dropped prior)is dropped; and when either reaches the sixth rank a Rook is dropped onto the board. The game ends when a King is checkmated, stalemated, a draw agreed, or a resignation takes place. 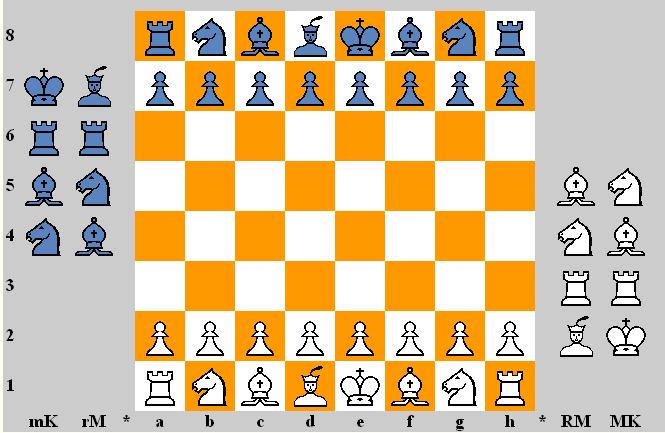 As in chess except: Magician: Moves as does a King. Upon reaching the 4th rank the Magician must release (drop) a Bishop or a Knight onto any empty square (any rank or file). Upon reaching the 5th rank, a Knight or Bishop (whicher was not dropped prior due to his movement) must be dropped onto any free square (any rank or file. And upon reaching the sixth rank a Rook must be dropped onto a free square (any rank or file). A Royal Magician can expose his King to check, if a dropped piece will result and block the check. The Royal Magician cannot be put in check. King: As in chess, plus he has all the abilities of the Royal Magician... but can be checkmated. A King can move into check if a dropped piece will block the check. The King and Magician can both drop light-square Bishops or dark-squared Bishops. Thus you could hav 1 light-squared Bishop and 3 dark squared Bishops in a game (your 2 original Bishops plus 2 dropped Bishops of a same square color). Or you could end up with 2 light squared Bishops and 2 Dark-squared Bishops... depending on your strategy.