This page is written by the game's inventor, Peter Aronson.

Royal Amazon Chess is the result of wondering how much is a piece weakened by being royal. So the Queen was made royal and promoted to an Amazon (Queen + Knight).

Setup is the same as for Orthochess, except that Queens are replaced by Royal Amazons. 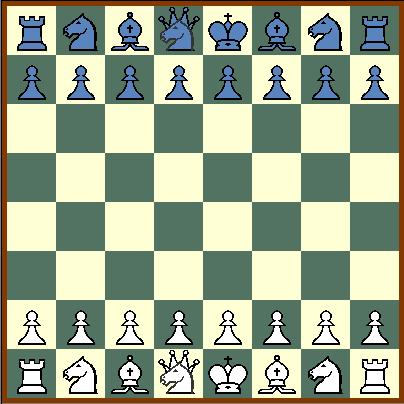 The King is still royal as well, so each side has two royal pieces.

A Pawn may promote to the usual Knight, Bishop, Rook or Queen, but not to a Royal Amazon.

Played by e-mail between Peter Aronson and Tony Quintanilla, 2005-2006.

The Royal Amazon army vs the standard Orthochess array makes for an interesting match, and allows comparison of the strength of the Royal Amazon as compares to the usual Queen.

It is surprising how much weaker the Royal Amazon feels than a Queen, even allowing it to move through attacked squares. As can be seen from the above sample game, using it to attack is almost certain to be a lethal mistake. I rather doubt that the variant with Royal Amazon vs Queen is balanced -- I think the side with the Queen will have a distinct advantage.