by Gary K. Gifford, August, 2006 The true name of the game is not known, but I have chosen to call it â€œRoswell Chessâ€ after the location in which it was found. It does not appear to be a game for humans. For one thing, to play the game correctly one is to move the pieces with his or her mind via telekinesis. For another, the game appears to offer little or no enjoyment to humans. 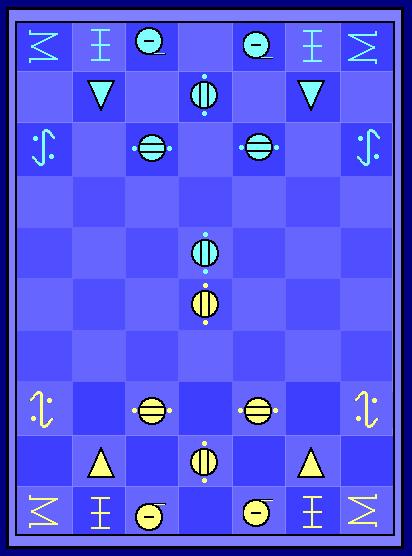 Pieces: The actual names of the pieces remain unknown. The â€œTeamâ€ used the following names and keyboard designations. M â€“ Marauder. Move as indicated by their vectors (see Diagram 1); this is deemed a â€œnormalâ€ move. A Marauder can capture on one or two spaces by making (a) a diagonal move in the direction of its slope followed by (b) an orthogonal move back towards its associated M-leg (see diagram). If a diagonal is occupied by a friendly piece, the Marauder cannot move on that leg of the â€œM.â€ In the diagram below, if enemy pieces were on B3 and C3, the left-hand Marauder could capture both pieces. If an enemy piece were on F5 and E5 was void of a friendly piece, then the Marauder could capture on F5. Instead of making a normal move, Marauders can perform a horizontal 180 degree flip. They would remain on the same square when flipping (see diagram, Marauder (on F4)before and after a flip. 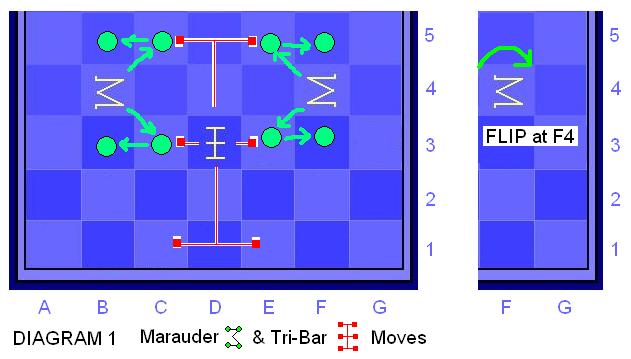 As indicated in the piece section. Plus:

On each turn a player can:

(a) Move any one of his 4 shields. Remember, shields cannot capture or be captured.

Note that (a) and (b) can be performed in either order. However, move (a) is optional, move (b) is required.

There are no checks, checkmates, or stalemates.

The truth behind this game. I was given a copy of a book entitled, â€œUFO UPDATE FALL of â€™95.â€ Its previous owner offered it for sale at a garage sale for 50 cents, but could find no buyers. Thus I inherited it. Upon flipping through the pages I saw drawings of Rosewell Film Hieroglyphics (One which resembled a Shogi King) and I saw a Roswell Report with lots of words, lines, paragraphs, and even complete pages blacked out. This was the version of the report which was â€œDECLASSIFIEDâ€ and released to the public. Of course, it is the blacked-out stuff that I want to read. Anyway, I got to thinking, what if it was no weather balloon that dropped down in Roswell back in 1947? What if there really were aliens and they had a game on board their ship? What ifâ€¦ ? And so I bring you this gameâ€¦ a game which I imagined bug-eyed aliens moving pieces via telekinesis (with their own brain-wave power).