Each side has two rows of pieces, instead of one. I was inspired by Capablanca Chess, which expands the game onto a larger board while introducing two new pieces. However, I do not like how Capablanca chess has almost as many Queen-strength pieces as it has minor pieces, which makes the game too tactically sharp while de-emphasising the more strategic role of the minor pieces. So, I have created this variant, which adds two new minor pieces and one new major piece to restore the distribution of material found in orthodox chess.

This game may be played using an 8x10 board and two standard sets of chessmen, though these sets must have distinct designs (for example: a wooden set and a plastic set; or a traditionally designed set and a novelty set) The first chess set represents the orthodox chess pieces while the second set represents the new pieces.

The pieces in the second set are used to represent the following new pieces: 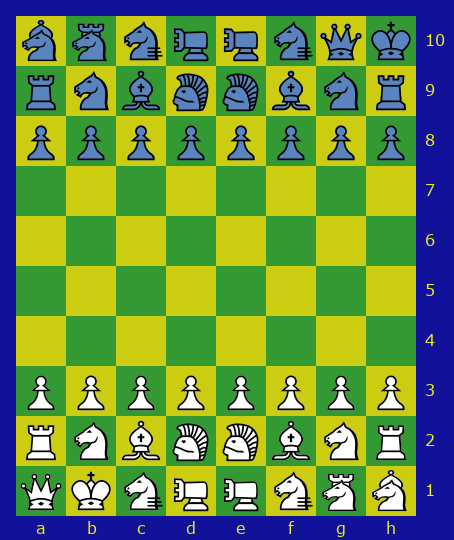 Cannon: Moves like a Rook, but captures the second piece on its path instead of the first.

Knight: Moves to the 8 closest squares which cannot be reached by the Queen in one move, like in orthodox chess. The knight moves directly to its destination without going through any of the intervening squares, so it can leap over a solid wall of pieces 1 square wide.

Bishop: Moves any distance diagonally, like in orthodox chess.

Commoner: Moves as a King, but is not subject to check and can be captured.

Rook: Moves any distance orthogonally, like in orthodox chess.

Nightrider: Makes any number of consecutive Knight moves in a single direction. The Nightrider is to the Knight what the Queen is to the King. Note: although individual Knight moves cannot be blocked, the Nightrider cannot do a second Knight move if the first one would result in it landing on a piece of either colour.

Paladin: Moves as a Knight or a Bishop.

Marshall: Moves as a Rook or a Knight.

Queen: Moves any distance orthogonally or diagonally, like in orthodox chess.

King: Moves one space orthogonally or diagonally, like in orthodox chess. Additionally, the King is subject to check.

This game follows the rules of Chess except for the following differences:

There is no castling, instead the Kings start away from the centre of the board. Note that the Kings do not start on the same file as each-other. 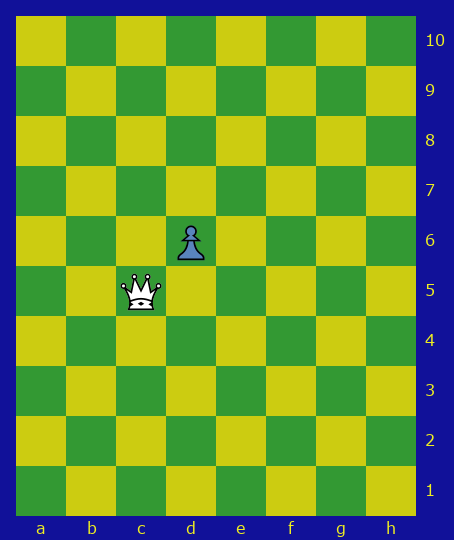 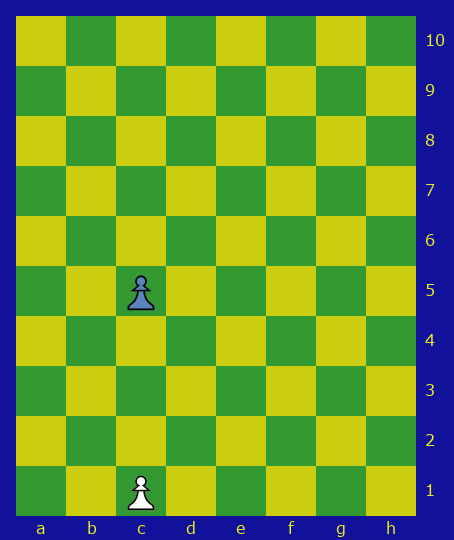 If the only empty square on the file is the last one, the pawn promotes immediately. In the rare case that there are no empty squares on a file, capturing a heavy piece on that file is illegal (as there is nowhere for the pawn to go)
*"Heavy piece" means Rook, Nightrider, Paladin, Marshall or Queen. The King is not a heavy piece.

Pawns may promote to any of the four minor and five heavy pieces.

In total, each player has 15 pawns (of which 7 are locked behind heavy piece trades), 8 minor pieces, 4 5-point pieces, 3 9-point pieces and one King.

The rule of heavy pieces dropping pawns upon being captured is to make sure there are always enough pawns to keep the endgame interesting after the heavy pieces are traded off. These pawns are not present in the opening position, as they would cause the position to be too closed.

The extra pawns produced by captured major pieces effectively reduce the exchange value of all heavy pieces by 1 pawn. This means a 5-point piece for a minor piece and a pawn is usually a fair trade for both sides; as is a 9-point piece for two 5-point pieces.

The Paladin is about a pawn weaker than the Queen, with the Marshall's strength lying somewhere between the two other 9-point peices. 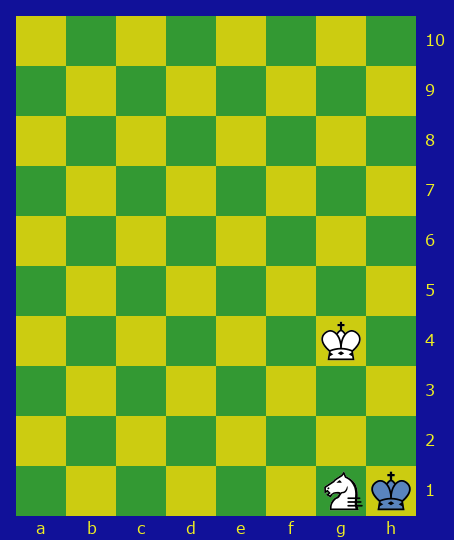 White to move. White wins by playing Kh3, forcing black to play Kxg1. This will make a new pawn on g2 which cannot be stopped.

As the opening position is three rows deep and all four of the pieces stronger than a Nightrider start on the back rank, there are no Nightrider reated opening tactics unless the opponent makes a bad pawn move.