When I created Herichess many years ago, I stated that I could not go right down to single rows of squares for that variant, partly as the board would be only 28 squares and partly because it would limit pieces to orthogonal directions. It is possible to construct armies made of a diversity of purely orthogonal pieces, but there was no getting around the small size of the board.

On the other hand, you can also reduce the size of two dimensions if you increase the number of directions, the idea from which this page takes the start of its name. This recreates the directions of the 2d board in full, so I use standard FIDE pieces. It occurred to me to use the symmetric ones in Nearlydouble numbers, and that pointed to five levels. I decided on a two-player version, with ten promotable Pawns, and a four-player one, with no Pawns (as there is not the room for them) but the ability to take over an army by Checkmating its King. In both cases I decided against allowing Fusion, as I judged that the Straight Bishop and 7x5 vertical planes made it unnecessary.

The board has 5 levels lettered a to e, 7 leftranks numbered 1 to 7, and 7 rightranks numbered 1 to 7. For White pieces leftranks mark how far left of their camps they have moved along rightrank 2, and rightranks how far right of their camps they have moved along leftrank 2. For Black pieces it is the same but from Black's perspective and with rank 6 instead of 2. Each cell is designated by leftrank number, level letter, and rightrank number. 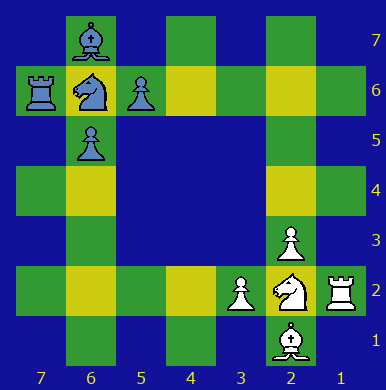 Levels b and d: 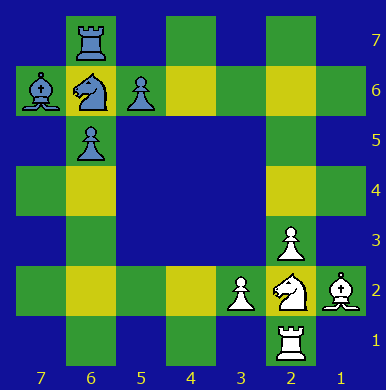 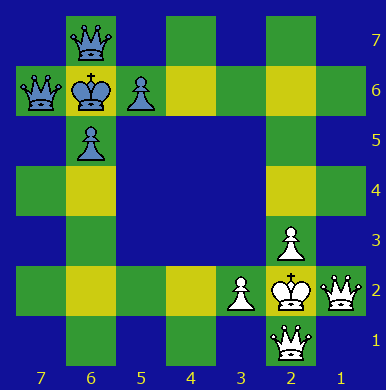 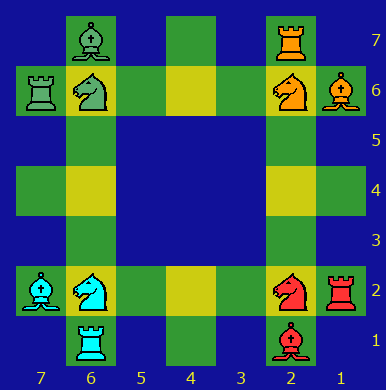 Levels b and d 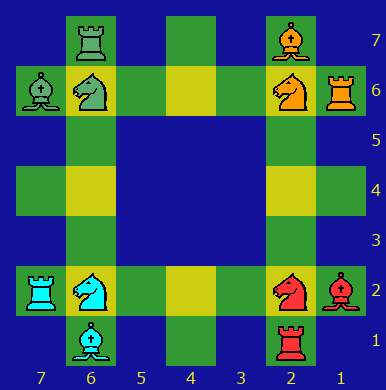 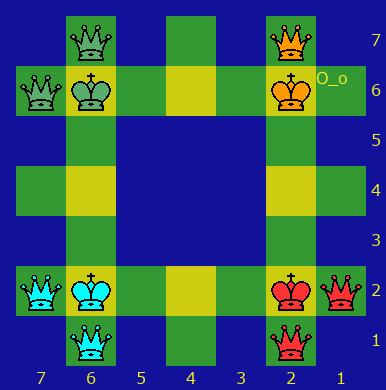 All pieces are standard FIDE ones. Each move must be entirely within a vertical plane, so that only orthogonal moves can be within a level. Pawns can move forward either a leftrank or a rightrank, and where vertical planes intersect they can change to the direction moving forward in the other directions. If in doubt, note that White Pawns must always increase one or other rank toward 7, and Black Pawns must always decrease one or other rank toward 1.

In the 2-player version play alternates between the two players starting with White. In the 3-player one it progresses anticlockwise starting with Red.

In the 2-player variant Pawns reaching leftrank or rightrank 1 (Black) or 7 (White) must be promoted to another capturable FIDE piece.

In the 2-player variant Check, Checkmate, and Stalemate are as in FIDE Chess. In the 4-player variant a player in Checkmated if their King is En Prise to the player about to move. When this happens that King is removed and the rest of its army transferred to the Checkmating player, who then takes their turn as usual but with the enlarged army. The first player Checkmated loses and the last to remain not Checkmated wins.