In 2007 I marked the Chinese Year of the Pig with a page of semi-modest variants of assorted standard and already-variant games using my pig pieces and their compounds. Well when the Year of the Rat arrived in 2008 I noticed that guess what, I had a whole range of pieces named after rodents both large (by rodent standards) and small. The former are extrapolations of the pre-existing Squirrel, the latter triaxial oblique pieces with progressively longer, and therefore weaker, leaps. As my Armies of Faith series does not cover China, continuing with variants marking Chinese years seems one way to balance out this omission.

So how could I incorporate so many pieces into a single variant? An obvious lead was my dice-based Carnival of the Animals. Wondering about determining coordinates in a similarly simple way, I rejected this as it would generate too many non-rodent pieces, some of which (though fortuitously none of the rodent ones) have shortest coordinates of 4 or even 5. Then I noticed that the small-rodent pieces clustered neatly into two groups by leap length or its square (SOLL). The Fieldmouse, Lemming, and Chipmunk have SOLLs 43-45, and the rest 65-75 (originally 67-75). This was untidy but inevitable given how SOLL ratios pin many names to their pieces, so I decided on three types of varying-with-dice-throw leaper, one for each group of 3d pieces and one for the 2d-perimeter ones. As one group had an awkward 5 members I originally threw in a derived-name piece, the 6:6:2 Numming whose name is extrapolated from the Lemming. A chain of ranamings in April 2009, however, gave the 6:5:2 leaper the rodent name Molerat, so I have revised the game to use that piece rather than the Numming, which has fewer destinations.

The board took longer to develop. Initially I thought of a vastly enlarged Tunnelchess board, to represent a tunnel seeming vast to the rodents themselves. In practice this offered no happy medium between an unwieldy total size and individual dimensions too confining for the long-coordinate pieces involved. Instead I went for a corner-based variant in the style of, though on a larger horizontal scale than, Heathen Europe Chess. 4 levels proved adequate as just under half the 3d pieces have a shortest coordinate of 3, and so can move from top to bottom level or vice versa, and the rest have a shorter shortest coordinate, and so can move from any level to the one two levels away.

The Year of the Pig variants happened to include a Xiang Qi variant, reinforcing the Chinese theme. As this was a single variant I decided to throw in some XQ features for the same reason - Hopping-capture pieces, non-divergent Pawn analogues, and a confined royally-restricted piece. To avoid too many piece types, there are no simple long-range radial pieces. Instead of the River, whose name does not fit 3d very well, I put the promotion zone within the enemy camp.

levels a and d 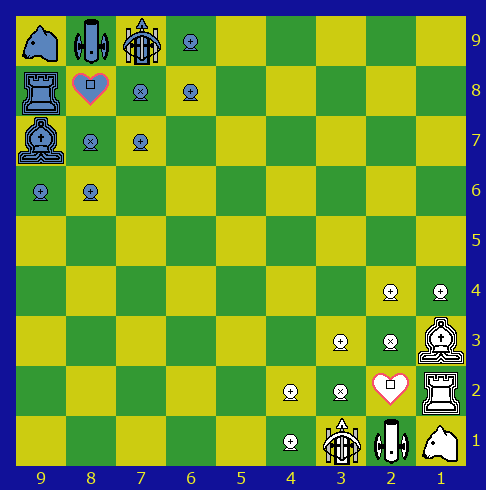 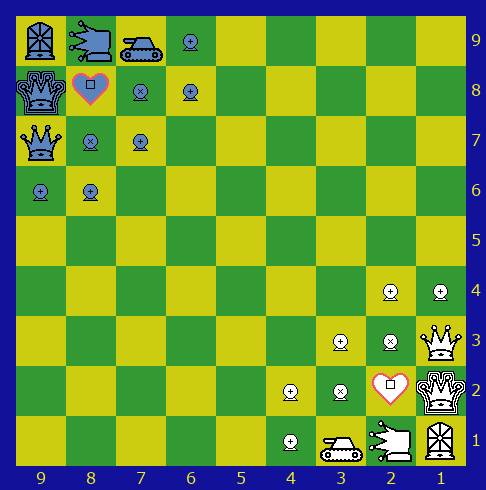 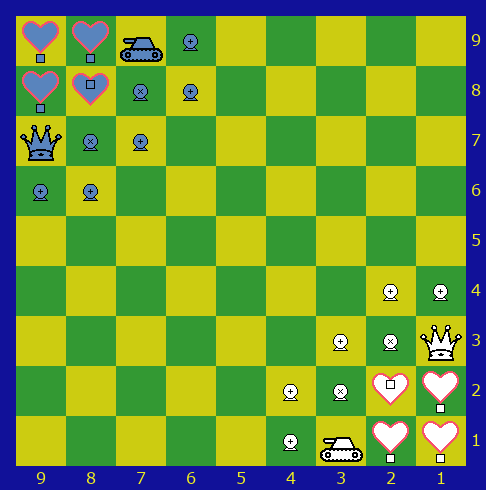 Points have an optional double-step noncapturing move along either horizontal orthogonal from the starting cell of any Point of the same army (including its own). Enemy Points (but no other piece) can immediately capture them En Passant as if they had made only the single step. Crosses have no corresponding move as the move on the same-level diagonal gives a faster average trek than the Point anyway.

Emperors can move only within the cuboid of three by three columns including their starting one, and must not face along a standard diagonal without an intervening piece.

Is it overkill to mark the Year of the Rat with the entire rodent order? Firstly, it was the nearest I could get to the diversity of pig pieces represented the previous year, with different ages and sexes of pig along with such beyond-heraldic hybrids as the Camelpig and Elephtrotter. Secondly, it is not as if there is a Chinese Year of Any Other Rodent. The rabbit, or in some versions hare, has its own Chinese Year, but these animals have been judged a separate order from the rodents for a few decades - although they have actually been a separate order from the rodents for a few million decades! Note that the work cited in Man and Beast 20: Far From Square, Alfred Sherwood Romer's Man and the Vertebrates, predates this distinction.

Before I had the idea behind this variant, I had already abandoned one rodent name for a piece, namely Vole. This was in order to expand a theme of religion and/or wisdom that I had spotted among my names for 3d leapers with 1 even and 2 odd coordinates, for SOLLs up to 66. I was unable to redeploy Vole for another cubic piece. Had I not made the change there would have been a block of 4 rodent names with SOLLS 42-45. After that renaming I considered eliminating that block of rodent names altogether, but could not do so satisfactorily.

Since creating this variant I expanded my list of cubic oblique pieces to maximum coprime coordinate 8. Two have rodent names, for the record the 8:2:1 Muskrat and 8:3:1 Octodont. Though theoretically movable on this board, they would be so highly constrained by it, and immovable from so many cells, that I judged them not worth including.

I have named many 3d oblique leapers with a minimum coordinate over 3, but none after rodents. As I parenthesised earlier, this was pure chance: three have marsupial names, so a game on that theme (beyond the short-range, 2d Kangaroo) would need a larger board. Fortunately no marsupials feature in Chinese horoscopes, as their natural habitat is too far south!