This variant arose from an interest in Quantum Mechanics and my wondering if a quantum chess was possible. Â This attempt starts from the variant Ultima, uses a hex board and attempts to adopt the Heisenberg uncertainty principle and to a much lesser extent particle entanglement.

The board consists of 91 hexes, and each player begins the game with 22 pieces; a piece-density of Â 48%. 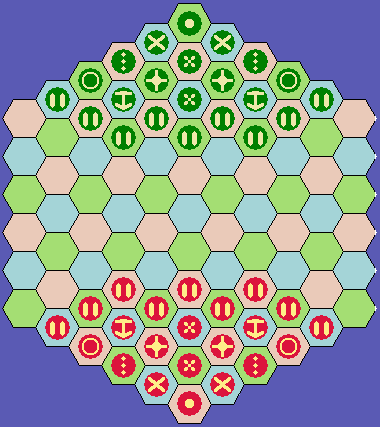 2. Uncertainty.
Â Â Â  Â Â Â  When a piece moves more than one step its final destination hex becomes uncertain,Â and is determined by the opposing player subject to the following conditions - 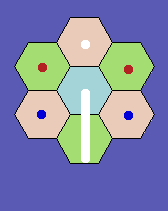 A piece has been moved by its owner to the central blue hex along the path of the white line.

The hex chosen as the final destination must be empty.
Â Â Â  Â
3. Removing a frozen piece
Â Â Â  Â Â Â  Any immobilized piece except a King, mayÂ be removed from play. Â So removing such a piece constitutes a side's turn. Â No other piece may be moved.