This page is written by the game's inventor, Simon Jepps.

Phantom Chess is a modern variation which features one additional piece per player, known as the Phantom. The Phantom however has no physical figurine, for it is intended as a "blindfold" piece, only existing within the joint consciousness of the two players.

The Phantom may capture or be captured, deliver or block Check and thus exists on the board just as realistically as all other Chess pieces. As such, it may not be moved "through" or its presence "occupied" since it is of equally integrated status.

The Phantom is as its name describes, an unseen spirit upon the board. It has no face, or figurine, no physical footprint or place to be seen. For the Phantom exists only in your consciousness.

When we play "Phantom Chess" we begin with a regular Chess set and play in the Classical regular manner.

Yet each player owns one Phantom, a spiritual piece with no physical presence, but which may "metaphysically" enter play at any time.

In addition to this special piece, players keep one communal piece of card on the table, upturned so as what is written cannot be seen. This is the Phantom Card. 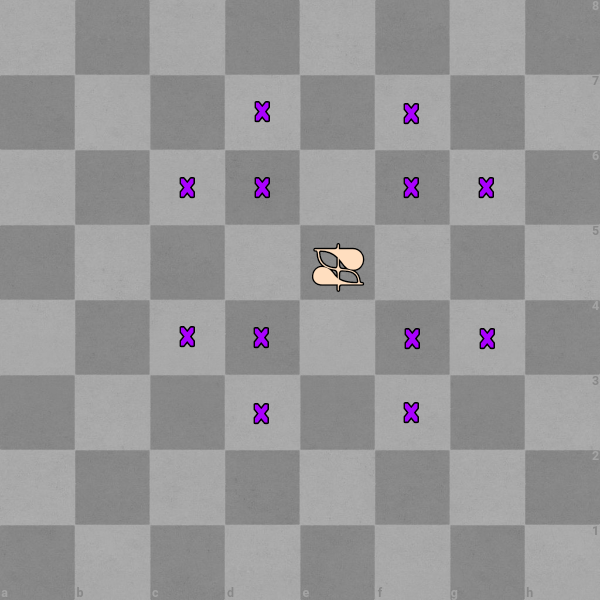 Whenever a player moves his/her Phantom, the player announces the move by algebraic notation to the opponent and then writes its new location on the Phantom Card. The card is then turned upside down so it can no longer be read.

Each player has three lives.

» Alternatively, players may only ever look at the Phantom Card to write their own move, or to resolve a dispute. This is of course a much harder variation of the game since the only way to remind yourself of the opponent's position is to move your own Phantom.

The Phantom enters the game by announcement to any square on the board. However the Phantom may not enter the game if to:

The Phantom moves one square diagonally or jumps like a Knight, in a 2,1 "L" move.

Whilst a "ghost" the Phantom is equally as real as any other piece. Thus it may not be moved "through" as if it were not there, nor have its presence "occupied" by either player, but instead may capture and be captured in the same way as all the other Classical pieces themselves. Indeed a Phantom can deliver Check Mate.

There is only one Phantom per player because it is a specially strong piece and besides, the average Chess player would find it difficult to handle more Phantoms on the board.

The Phantom piece is notated with an "F".

This is not purely to avoid confusion with the Pawn, but since the "forte" symbol in music is an elaborate "f" and Opera is close to the Phantom's heart, it only seems appropriate.

Whence communicating through Chess diagrams or computer interfaces, any kind of icon may be used, since even Classically there are no rules. The icon used here is actually a dollar sign from an artsy Asian font by Moji Waku, thus anything goes. I really like this icon.

In regards to computer opponents, the method of play would be the same, the Phantom only shown on board whence sacrificing lives or recording its move.

Of course, if recording tournament games, then the Phantom card would not be used since a player could merely look at his own game record. But nevertheless, the mere invisibility of the Phantom is the fundamental key to its elusively cunning strategical character. It is this skillful engagement of memory which will deliver the Phantom's worthy purpose in any competition scenario.

For more information and discussions about Phantom Chess, please visit the inventor's website YllwChlk, where even more Chess variant ramblings and studies can be found.