Partnership Chaturanga is simply a contemporary variation of the old 4-player Chaturanga played with four-sided long dice, in India about 1000 years ago.

The Black and White armies form one partnership, the other two colors (i.e. Red & Green) form the other partnership. 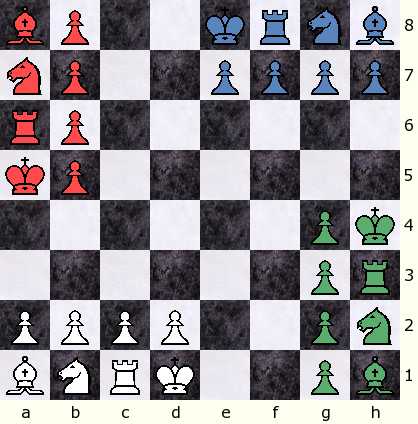 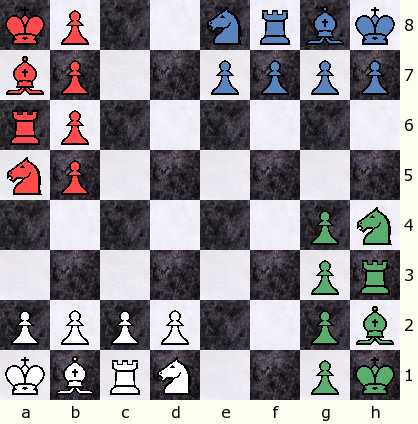 The setup (diagram above left) is the same as for 4-player Chaturanga, except for the use of the modern Bishops on the corner squares to represent the old Boats.

Alternately, the four pieces behind the pawns can be placed in a random order. The arrangements must be symmetric for all players (sample random diagram above right). There are 24 possible random positions.

It doesn't matter whether you have a light or dark square on your left corner square. It's irrelevant with what color squares in your corner you start the game.

In the initial layout, enemy Bishops (or Boats) can not face each other in battle for they start off in oposite color squares from one army to the next (unless they are promoted to the opposite squares later on in the game).

There are no 'en passant', castling, check or checkmate rules in this game.

The objective is to capture both opponents' kings to win the game.

Once a parternship has bare Kings (one or two) the opponents have 20 rolls to finish the game and capture the bare Kings (or King). Otherwise the game will be a partnership draw.

Two 6-side dice are used to determine which pieces can be moved.

Each player in their turn rolls the dice, and get to play two pieces (or the same piece twice) based on the numbers showing on the roll. Then play moves on clockwise to the next player.

Depending on the roll a player may only be allowed to play one piece, or none at all (an all sixes roll is forced pass).

Players are allowed to pass:
- At will (if they do not want to play one or either of their rolls)
- If one of the rolls would yield an illegal move
- If the roll calls for a piece the player doesn't own anymore
- By the forced pass roll (an all sixes roll)

Three dice may be used instead of two to give players an extra option to choose from for what to play. After rolling, players are required to discard the one dice of his/her choice, and play the numbers shown by the other two dice.

Pawns promote immediately to: King, Rook, Knight or Boat. The player promotes to his/her choice of a piece of his own army that has already been captured. If no pieces are available for the promotion, the pawn is inmobilized until the next piece of the same color becomes available. While the pawn is inmobilized at the promotion square, it is vulnerable to an opponent attack and can be captured.

Promoting to a captured King is only allowed once per player. A King that has been captured twice can not return to the game.

It's possible for a player's entire army to be annihilated, which would put him out of the game (without needing to roll anymore). In this case his/her partner continues to play against the forces of the other partnership. The players in the opposite partnership now roll in their turn back to back against the lonely opponent.

It is possible to capture one's partners pieces when it strategically makes sense. Capturing your partner's King or your own pieces is illegal.

Since there is no check or checkmate, it is possible to put one's own King (or any other piece) en prise.

A common tactic to take a chance and put a piece on a threatened square (en prise), with the hope that the next roll will not allow an opponent to capture the piece.

Unlike orthodox chess, the King is not a passive piece. Kings are often taking part of the attack, especially when his/her partners King is still on the board.

This is a very fast aggressive game which promotes team work.

When I first saw the rules for the 4-player Chaturanga, I felt that the game a bit too complex, especially if I wanted to try the game with my children (ages 5 and 7) and my wife (not chess inclined).

With my simple changes to the rules of the former game, the addition of commonly known 6-side dice, and the luck rolls; the game became a very easy, balanced, quick and interesting game to play with my small family.

The luck of the dice took my chess strategic advantage away, and made the game fun for my wife an young daugther (she rolled a double two in the first game and got my King with her Boat the first time around!) to play.

The game has been great for my older son to develop his tactical eye, as the dice take away the need for him to worry which piece to move, and instead he concentrates on how to maximize the damage he can cause with the roll he gets.