Over my time contributing to the Chess Variant pages I have taken a great interest in different geometries. Most of my variants follow the traditional square-cell geometry, either on rectangular (including square) boards or with concavities. The latter are typically multiplayer, such as Fivequarters and 125% Shogi/XQ. Also fairly extensive are my cubic-cell variants, some such as Tunnelchess with 4x4 8-cell files, others such as Unionschach and Sachsenschach with 6x6 6-cell files. I also have hexagonal-cell variants such as Anglojewish Chess, hex-prism ones such as Honeycomb Chess - for which I am still awaiting an update submitted many years ago - and 3-player Honeycomb Chess.

This was my firt attempt at a variant in the xyrixa geometry as used in, and named after an obscure variant with the same board as, Mark Thompson's Tetrahedral Chess. On examining Tetrahedral Chess I identified the cell shape as that resulting from removing cubic cells of one Bishop binding and expanding a sixth of each neighbouring cell of the other binding into the void. Another contributor put a name to this shape: rhombic dodecahedron. This gives the board 12 orthogonal and 6 diagonal directions, the reverse of the cubic board. Likewise it gives a vast 24 Unicorn directions but only 8 Sexton (root 6 leaper) ones. Numbers of Knight and Camel directions are unchanged from cubic as both are 24 anyway.

My reason for choosing a board in the shape of an octahedron is twofold. Firstly, this shape complements Mr. Thompson's tetrahedron - neither can tesselate on its own, but the two can together, in a ratio averging twice as many tetrahedra as octahedra, as Maurirts Escher's lithograph Flatworms illustrates. Secondly it helps visualise the two kinds of plane in this geometry, for like the hex-prism one it contains both square and hex planes. As with the board in the shape of a tetrahedron, each edge of the board is an orthogonal, and each face a 21-cell hex plane, but additionally each of the three symmetric bisectors is a 36-cell square plane.

It is worth contrasting this variant with Michael Ward's Octahedral Chess, from which it differs in several ways. Firstly, the dimensions are 11x11x11 if each dimension is square board, as against Octahedral's 8x8x9. Yet the number of cells is far smaller, at 146 as against 340, and the number of true ranks, which are hex planes, is 6. The key to this is that each Bishop binding, of which there are four, can be viewed as a cubic-cell board. The three based on the three pairs of vertices have 1+5+13+13+5+1=38 cells each, while the remaining one has 4+12+12+4=32 cells. This adds up to 38+38+38+32=146 cells. 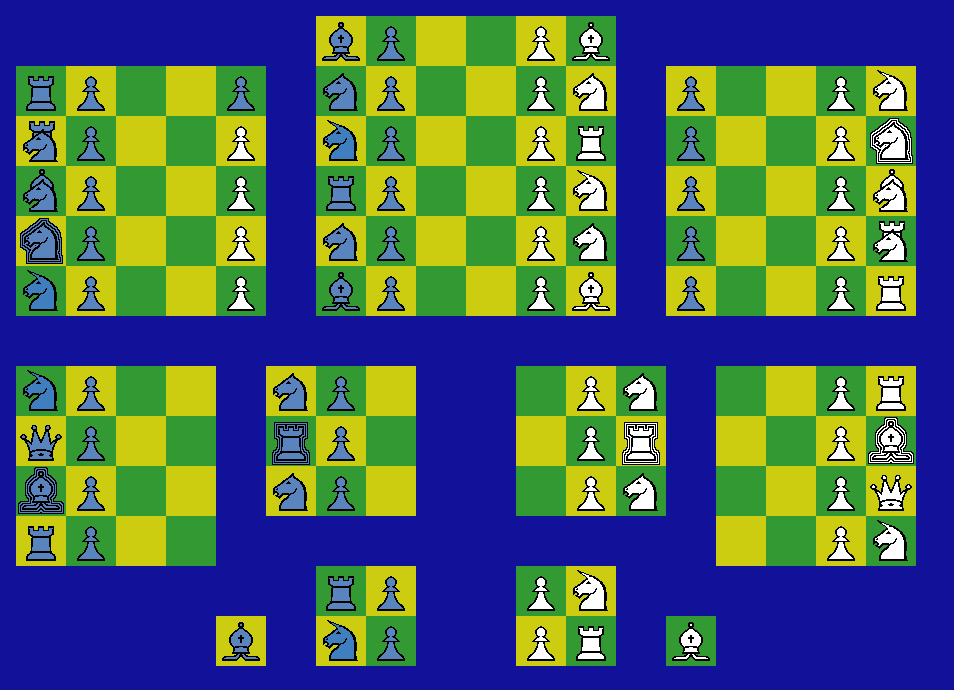 Simple symmetric pieces, 4 of each aside: Here is a summary of possible moves from the middle of a 5x5 level (marked *) to the same level and to and through the middle level. Lower case letters indicate where the move would continue if another layer of cells were added to the outside. Compound symmetric pieces, 1 of each aside: Divergent forward-only pieces, 25 aside:

There is no initial double move, En Passant, or Castling.

The first time each player moves a non-Bishop compound, the fourth Bishop fills the vacated cell, as these are the only back-rank cells on the non-vertex binding.

A Pawn reaching the starting cell on a symmetric enemy piece is promoted to any array piece.

Victory is by capturing all enemy... Rooks and Rook compounds, or Bishops and Bishop compounds, or Unicorns and Unicorn compounds, or Knights and Knight compounds. This is modelled on my recent variants Notchess and Nichtschach, as there was no room for a King or Emperor in the array.