Neutron was invented by Robert A. Kraus and is included the basis set of games for Zillions. The goal is to move a Neutron to your home rank. The Neutron is a neutral particle, which is moved by both players.
In Neutron, players have Pawns. Both the Pawns and the Neutron move as far as they can in one of the eight directions. In a move, a player first moves the Neutron and than one of his/her Pawns. The issue is to block the Neutron's way to your opponent's back rank and to enable it to go to your back rank. No piece can be captured.
In Neutron 45, the Pawn and the Neutron are left the same. Three pieces are added to add different flavors. The idea of the game is kept the same. 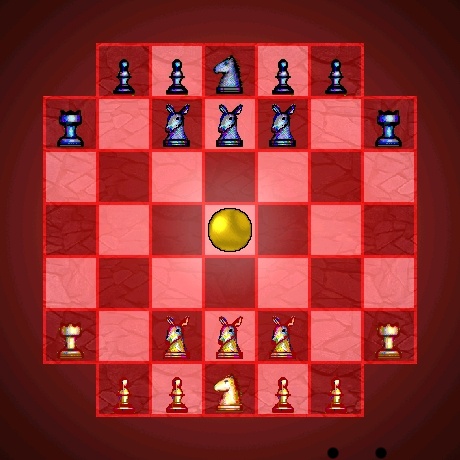 There is no piece that can capture or be captured. All pieces in the starting array will remain on the board for the whole game.
The Neutron slides in any (orthogonal or diagonal) direction to the last square before it is blocked. If a piece or an edge of the board is directly adjacent to it, it can't move in that direction. At any time when the Neutron is on a player's back rank, that player wins the game. This piece in unchanged from Neutron.
The Pawn moves exactly like the Neutron. The only difference is that the Pawn is owned by a player and that nothing happens when a Pawn is on a back rank. This piece is also unchanged from Neutron.
The Hopper slides in any (orthogonal or diagonal) direction until the first obstruction. It leaps over the obstruction to the square directly beyond if it is empty. If the square behind the first obstruction is either occupied or not there, the Hopper can't move in that direciton. The Hopper appears in other games with the name Grasshopper. The difference is that the Hopper can't capture nor be captured as any piece in Neutron 45.
The Castle moves in any (orthogonal or diagonal) direction until blocked by a piece (never when blocked by the edge of the board). The blocking piece is moved to the square at the other side of the Castle's destination square. You can't use the Castle's powers without moving. The reason this piece is called Castle is that it acts like the chess Rook in castling. The Castle, however, can castle with any piece regardless of type and owner. It can even castle with the Neutron. Furthermore, the Castle can castle in any direction including diagonals. It can't move without the castling effect.
The Knight moves like a Knight in chess, two squares in one orthogonal direction plus one in a perpendicular direction with jumping. But like all pieces, it can't capture nor be captured.

The turn order is:
White moves one of his/her pieces.
Black moves the Neutron.
Black moves one of his/her pieces.
White moves the Neutron.
And play continues in this order. At any time, when the Neutron is on a player's back rank, that player wins the game. If a player is forced to move the Neutron to his/her opponent's back rank, he or she must do so and loses the game. You could also win by castling the Neutron to your back rank. However, the geometry of the board and the Castles' starting positions render such a move impossible. When a player can't execute a part of his/her turn, that player loses the game.