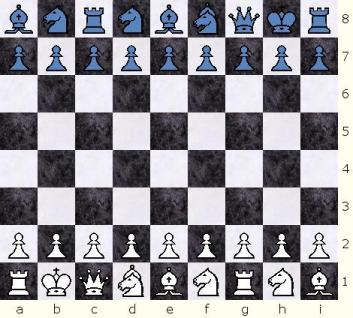 Modern Prime Ministers Random Chess (PMRC) is a new 9x8 variant inspired by Gabriel Vicente Maura's 1968 Modern Chess (9 columns, reverse symmetry, symmetric long castling (O-O-O) to either side, an extra pawn, the Prime Minister [B+N]) with the some random concepts & the castling formula from Fischer Random Chess (FRC), but Ã  la "Capablanca"! (on a board with the same number of ranks (8) as Ortodox Chess, but with more files (in this case 9) to accomodate the extra pieces [the Prime Ministers]).

Modern Random Chess (MRC) is a merge of concepts from Gabriel Vicente Maura's 1968 Modern Chess (9x9 setup, Reverse Symmetryreverse symmetry, symmetric castling to either side, an extra pawn, the Prime Minister (B+N) and a Bishop Adjustment Rule) with some random concepts & the castling formula from Fischer Random Chess (FRC).